And if you are a student, Vermont wants to know.


Are you transgender? Vermont Agency of Education wants to know
Vermont Watchdog
By Bruce Parker
April 15, 2015

As the governor and Legislature weigh cuts to close a $113 budget gap, the Vermont Agency of Education is spending more than $23,000 to find out if Vermont school kids as young as 10 are transgender, among other things.

The Vermont School Climate Survey, which was developed over the past few months at the request of Education Secretary Rebecca Holcombe, seeks to help school administrators know more about the student learning environment.

Boy, is the headline and first paragraph loaded? It sounds like that is the only question being asked but in reality it is part of a school climate survey,


Based on nearly 50 questions put to students, researchers hope to gather data on bullying, cyberbullying, sexual identities, race and even guns from children as young as 10 years of age.

In the survey’s section on demographics, researchers ask students to identify if they are male, female or transgender. Another question asks students if their school provides enough learning opportunities about sexual identity and race. 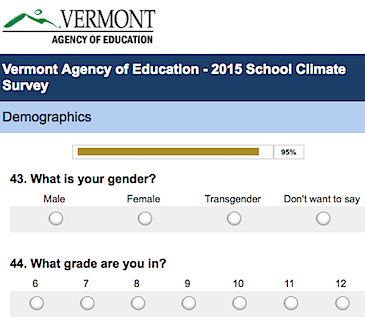 Here in Connecticut I am a member of Safe School Coalition, we are trying to get funding and have the schools use one standard school climate survey instead of a 169 surveys.
Posted by Diana_CT at 3:00 PM