My Story Part 183: Coming Together. 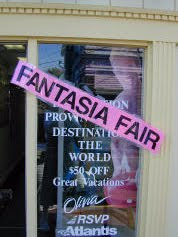 There are some lesbians and gays who say that they have nothing in common with trans people.

One year we were staying at a Bed and Breakfast in Provincetown; it was a Sunday afternoon, the last day of Women’s Week and the first day of Fantasia Fair, the B&B had put out wine and cheese in the common area. On one side sat the lesbians talking among themselves and on the other side sat us, never the two shall meet or would they find common ground over bottles of wine?

People who identify as LGBTQ say it's a process to tell people about their identity
KRIS TV
By: Andrew Christiansen
October 11, 2021


SINTON, Texas — Many people who identify as LGBTQ face challenges while telling people about their identity, but they can also face triumphs in the process.

Allison Williams said coming out as a transgender woman has had its difficulties, as Williams came out around a year ago.
[…]
However, Williams still lives with one regret about coming out: not being able to tell some family members.

“I was especially the most scared to tell my father,” Williams said. “I never got to tell him. He passed away whenever I was 22 or 23…I know that he would still love me.”

Sitting around that coffee table at the B&B all those years ago with the seven lesbians and about an equal number of trans people the subject of coming out came up, I forget who brought it up or if it was brought up by one group talking among themselves but however it happened we started talking about our coming out stories.

However, Apple said telling people about being transgender has been different than coming out as gay because there are more resources and awareness when it comes to coming out as gay, lesbian, or bisexual.

“It’s a completely different experience of having to work with yourself to come out and come to terms with it and come into your own identity,” Apple said.

Apple said while coming out isn’t easy, there are many generations of people that have done it before and there is still hope for people who feel like it’s not an easy process.

I don’t think that it is that much different between the LG and the T coming out, the only difference that I see is that people are more informed about lesbians and gays than they are of trans people.

Back at the B&B after several bottles of wine we had crossed the bridge and we were one group of LGBTQ people not divided but one. We had found common ground and the barriers went down, that night we met on Commercial Street. They were coming out of a nightclub where a lesbian comedian was prefrmng and we were coming back from FanFair wine tasting at Crowne Pointe Hotel (Just what we didn’t need more wine.) and we walked back together to the B&B. Latter that night we met again in the hot tub, in the morning we sat talking over breakfast.

As we departed in the morning, they on the way back to Ohio and us off to the orientation we stopped had out picture taken together.

Besides out commonality in coming out we also share a darker side; discrimination and violence.

Email ThisBlogThis!Share to TwitterShare to FacebookShare to Pinterest
Labels: about me, LGBTQ+, my story, trans stuff