It's Against The Law

Schools have no choice they must include Gay Straight Alliances (GSAs) but they still are throwing barriers in the way to the GSAs.

School board listens patiently as mom calls sponsor of gay inclusion club a pedophile
By The Kansas City Star Editorial Board
October 14, 2021


Members of the Kansas City LGBTQ Commission were told they couldn’t speak on behalf of gender non-conforming and LGBTQ children in the Independence School District at Tuesday night’s meeting. Officials said that’s because only district residents and employees are allowed to address the board, per district policy, even though the Independence School District is one of more than a dozen districts within the boundaries of Kansas City proper.

We have no evidence that they were singled out for exclusion, or that other non-residents have been allowed to speak in the past.

Yet the fact that the Independence school board then did listen on Tuesday night to a parent who called the teacher who’d started a gay inclusion club a pedophile made us wonder if whatever rules there are that make hate speech OK need a common sense update.
[…]
Herl still hasn’t explained why he recommended and the school board approved this year disabling the option for students to pick their preferred pronouns when logging in for virtual classes. Herl also ordered the removal of Independence Black Lives Matter and gay pride posters from the walls of a middle school last fall.

To me that smacks as discrimination if they allow other clubs and posters to be hung in the halls.

The Board has put roadblocks in place to prevent anyone from speaking in opposition.

Technically, Gragg herself should not have been allowed to speak on Tuesday, according to board policy. Yes, she’s a district resident, but everyone who wants to speak is supposed to email a board secretary one week prior to a board meeting to request to speak. Pre-approval is needed and comments or questions directed to board members are requested in advance. Some are allowed, most aren’t.

Board policy says speakers can only talk about what’s on the agenda, which this month was posted three days after the district’s own deadline.

You have to speak about only items on the agenda but we are not going to tell agenda until after the deadline.

Gay Straight Alliances cannot be blocked from schools if the school has other clubs the law and the Supreme Court has said.

Federal law protects student clubs — even ones you don’t like
Edwin C. Darden
May 1, 2015


If a school district allows students to form noncurricular clubs, it must allow all clubs.

When high school students seek to start a controversial club on campus, their youthful ambition might ignite a local firestorm. Their right to proceed, however, is firmly protected by federal law.

The Equal Access Act (EAA), a student-friendly statute, has existed for more than 30 years. Yet, some educators still flinch when envisioning teens pursuing conversations or activities they find despicable. That hardheaded instinct to control student clubs has recently revived unnecessary scuffles.

This much is clear: Adult judgments about what is inappropriate or what cannot be abided is not the standard.

But the Independence School District doesn’t seem to understand that and it is not just the EAA, it is also the courts. The ACLU reported,


MIAMI, Fla. - A federal appeals court panel has overturned a lower court’s ruling that prevented a group of Lake County, Florida students from establishing a gay-straight alliance (GSA) at their middle school.

The ruling today from the 11th Circuit Court of Appeals holds that the Equal Access Act, a federal law that guarantees student groups equal access to school resources if their school allows extra-curricular clubs, applies to public middle schools in Florida, not just high schools.

But conservative school boards just ignore the law and the courts. 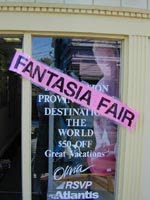 Today is the first day of Fantasia Fair and on the calendar today is fair registration and Epic Reunion Welcome Reception [They seem to be hung-up on the word “Epic”].

I have to run earns this morning to get a HDMI to HDMI cable, and make copies of my workshop syllabus down in Orleans, then head up to P'town to register for the fair. Then head back to town at night for the reception (Hopefully, if I'm not too tired. Nine o'clock is pushing my bedtime because it is a half hour drive back to the cottage.).
I have been attending the Fair off and on since around 2001.