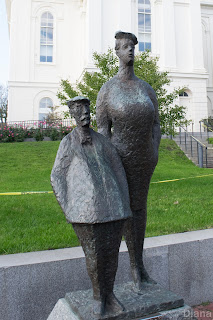 So now that I know that it is at 10 and not 11, I have been getting there around 9:40. Setting up my computer and monitor bring chairs over for the workshop, but no one came today so I waited for a half hour while I checked my email.

One of the email was from a lawyer friend from GLAD told me about a new discrimination case in Maine (More on that at the bottom of today’s post.) and I got a couple of other posts that I answered.

Since no one showed up I had a half hour to kill so I went to Herring Cove Beach in the Cape Cod National Seashore. I put the seat back, lowered the window and listened to the surf and seagulls.

Back to P’town for lunch and meet some new trans people who were at the Fair for the first time. Today’s lunch was at the Crown & Anchor, at FanFair I always go there on Friday for the fish & chips.

Well back to the cottage.

I get there a little before 2 and read my emails… YIKES! I have a zoom meeting in fifteen minutes! With the Governor’s Council on Hate Crimes! Quick clean off the table. Throw the coffee mug with a tea bag into the microwave. Go get my laptop from the bedroom. Where’s my headphone? Back to the bedroom get the headphones. Grab the mug as I run by the microwave. Open Zoom just in time for roll call… “Here your honor.” Whew!

So this morning’s email announced a discrimination case in Maine.

The complaint, filed by GLAD on behalf of a 78-year-old woman who was denied a room by Sunrise Assisted Living because she is transgender, is the first such legal claim of discrimination brought in the U.S. against a senior long-term care facility.

October 21, 2021, AUGUSTA – GLBTQ Legal Advocates & Defenders (GLAD) today filed a discrimination claim with the Maine Human Rights Commission on behalf of a 78-year-old woman who was denied a room by Sunrise Assisted Living in Jonesport, Maine because she is transgender. It is the first known discrimination complaint filed in the U.S. by a transgender older adult against a long-term care facility. The complainant is being represented by GLAD attorneys Ben Klein, Chris Erchull and Mary Bonauto.

In the spring of 2021, the complainant, who is being identified publicly as Jane Doe, was admitted to Pen Bay Medical Center for an acute medical emergency. Once Ms. Doe’s health was stabilized, the medical staff determined she did not require in-patient care and needed placement in an assisted living facility. A hospital social worker contacted Sunrise Assisted Living on Ms. Doe’s behalf and was told they had rooms available. Upon learning that Ms. Doe is transgender, however, the Administrator at Sunrise informed the hospital they would not admit Ms. Doe because they were concerned she wanted to reside in a room with a female roommate, despite the fact that Sunrise regularly places women in semi-private rooms with other women.

The claim brought by GLAD on Jane Doe’s behalf asserts that Sunrise discriminated against Ms. Doe on the basis of her gender identity, transgender status, and her sex, all explicitly protected under the Maine Human Rights Act.

Being denied a room at Sunrise because she is transgender also forced Ms. Doe to remain in the hospital longer than was recommended by her medical team.”

I think that one of the key factors in the case will be that “...to remain in the hospital longer than was recommended by her medical team.”

Too bad it had to take a lawsuit to force them to do the right thing.

Sadly I foresee some anti-LGBTQ legal organization picking up the case to defend the long term care facility and it going to the US. Supreme Court.