Fantasia Fair Day 4: Back On Track 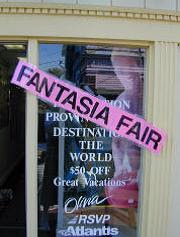 So I got there 20 minutes before 10, I wanted to make sure that I wouldn’t be late and I got a prime parking space right in front of the Boatslip door. I had two people show up and we had a good discussion.

After the workshop I had chosen lunch at the Post Office… no, no, not that post office but rather the Post Office Cafe & Cabaret. It was sold last year and is under management but it looks like they the former owner share the meatloaf recipe.

I was early so I passed the time sitting on the park benches in front of the town hall watching life pass me by.

When lo and behold who walks by but a couple that I know and they were also heading for the Post Office so I joined them. We caught up on the last two years. I also saw a few other faces that I know.

One thing about the fair, you  get your exercise, the couple that had lunch was also say that they were getting tired from walking. If you every come to the fair bring walking shoes, the first time that I came I only had high heels and I regretted not bring other shoes. Now most have flats and have their heels in their pocketbooks. Me, I just wear sneakers.

Email ThisBlogThis!Share to TwitterShare to FacebookShare to Pinterest
Labels: about me, Fantasia Fair, trans stuff