Fantasia Fair Day 6 (Ignore the other Day 6, its fake!) 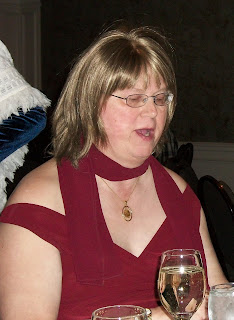 This morning there were no close by parking spaces so I hoofed it from the Fire Station parking lot on Shank Painter road to the Boatslip. I had two people show up for the presentation and they had a number of photos to share. I tried to talk them into posting them on FanFair’s Facebook page, hopefully they will.

On the way back to the car I spied on of those Terracotta strawberry pot planter and it had plants that were still producing strawberries, there was one ripe berry, a couple semi-red berries, and a number of green berries. What a strange fall it has been, the leaves on the Cape haven’t started to change yet.

I went home after my workshop because I had a lousy night sleep and I wanted to take a nap but that didn’t work either.

The dinner, Fantasia Fair Awards Banquet, was well the same as it always was. However, the prime rib was heavenly, the that I ever had… it melts in your mouth… good. After the awards were handed out I snuck out of the room and went to get my car, and pick up a friend to bring her to the Boatslip so she didn’t have to walk.

This morning they are having a Farewell Breakfast that I’m skipping by the time they start I would have eaten already. Instead a couple that I know is staying over from the Fair and we are going out to dinner at the Van Rensselaer's Restaurant in town.

For the Banquet I brought my red dress shown above but when I tried it on I looked like I was nine months pregnant. Well maybe next year when I lose another 10 pounds, so instead I wore a black and white skirt and a white top with low heel pumps.

I first went to FF in 2001 so this is my 20th anniversary and the Fair has changed, it used to be a mixture crossederssers and those who have transitioned but now it seems to morphed in to couples. I will say probably three quarters of the attendees are here with their spouses, so most of the workshops are geared toward them. I think that I was one of the few attendees who have transitioned.

I tried to hit the niche for those who have been coming for a long time and didn’t care for the couple workshops and were not interested in makeup workshops but that niche is not there anymore. Proving the saying "You can't go home again."

Email ThisBlogThis!Share to TwitterShare to FacebookShare to Pinterest
Labels: about me, Fantasia Fair, trans stuff