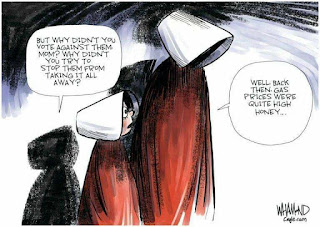 Voters tend to vote for local issues and issues that directly affect them and lets face it even through we see our human rights as a major issue most people do not.

Our goal is to make our rights one of the issues that people see as important to them.

Unfortunately, Martin Niemölle poem is right, “First they came for the socialists, and I did not speak out—because I was not a socialist.” it could be rewritten today as,

The Texas Republican Platform is an blueprint to leading us to authoritarianism.

We have to make these human rights issues as important as economy for the voters, we have make them realize that the way the country is toward fascism. That their silence is implied consent to the Republican policies.

The question is how do we do that?

How do we get the voters past their pocketbooks and to take a long view?

Update 3:30 PM
With the Supreme Court decision on abortion which is a good cause to help out and work with other organizations to show the trans flag. We need to build a strong coalition to defeat the Republicans at the mid-term elections.