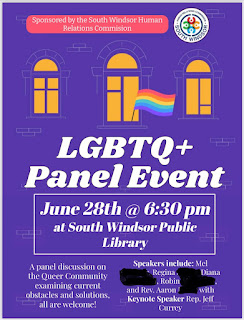 There was a contrast between blue states and red states, in the headlines you see all these protests at libraries in red states because they have a LGBTQ agenda… in other words the libraries have LGBTQ+ books, drag queens book readings, and LGBTQ events.

Well last night I was on a panel at a library event sponsored by the town’s Human Relations Commission. No one of panel I didn’t know, many of us go back a long way. I mean a really long way, over twenty years. The introduction keynote speech was by one of the two openly gay legislators and the panel was was made up of LGBTQ+ people.

The purpose of the event was,

Dedicated to the Anniversary of the 1969 Stonewall Riots, this panel serves to highlight the unique obstacles faced by the Queer community and potential solutions

What I thought was interested was that the panel was an idea of a high school intern to the Commission who was also a lesbian.

There were also about 20 people in the audience, just about all of them older adults, who took time out of their lives to hear what we had to say. With all the protests about LGBTQ event at libraries around the nation I wondered what our reception would be like but Connecticut didn’t let me down, it went off without a hitch.

Of course there was a question about how the Planned Parenthood v. Casey case overturning Roe v Wade affect us. On that question the point that I wanted to make was we cannot just look at one issues but have to build a coalition. Divided we fail, together we win. It is not just women’s rights, it is not just LGBTQ+ rights, it is not just Black rights, or immigrants rights, but rather Human Rights.

Another topic that was brought up was discrimination in schools. Here in Connecticut we have a hundred and sixty nine silos, through out the country you see “consolidated” school districts, outside a couple “regional” school districts where there are not enough pupils to have a school in each town, each town has its own school board and governs only their town. You see 169 different ways the states laws are enforced.

In one town they threw out an excellent non-discrimination policy that enumerated protection for for the protected classes in the state laws including LGBTQ+ students to one that said “We do not discriminate” when an all Christian board of education was elected.

Also intersectionality was discussed, race, socioeconomic status and other issues affect LGBTQ+ issues… in all it was a very good night and I made it home before dark.

Email ThisBlogThis!Share to TwitterShare to FacebookShare to Pinterest
Labels: about me, activism, LGBTQ+, politics, trans stuff