For the holiday weekend I got in my car and headed south to Long Island but you run into a small problem, Long Island Sound, it is 150 miles to drive their house and requires driving through New York City, but there is a shortcut that cuts it down to 120 miles and it allows you to sit back and have breakfast or a cocktail.

I decided to take the car and not park it because the fare for me and the car was only about $20 dollars more for a walk-on if you figure in the parking fee for four days.

The trip over was boring! You couldn’t see more than a couple of hundred feet because of the thick fog, and every few minutes the ship’s fog horn blew. Pulling into Orient Point I hoped that the captain knew where he was because you couldn’t see the dock until it was right in front of us. 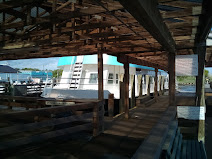 As soon as I got a couple hundred feet from the water the sun was out but I had to pull over to the side of the road because my GPS showed me in the middle of Long Island Sound and was telling me to make the next legal U-turn. Then blink, it was updated and I headed to my friend’s house on the South Shore. There I met their other house guess who I had met before, we then all headed out for dinner at “The Pines” on Fire Island at the Bistro there. We took the ferry over there from Sayville.

These are not your car ferries but are greyhounds zipping back and forth across Great South Bay.

I have been over to Fire Island a couple of times but that was to Fair Harbor, there they cottages are more middle class cottages but the Pines well there is money there, the yachts moored there were in the six figures and there was an open house and it was going for a measly $1.6 million.

We were early for the out reservations, there were a few showers as we waited for the restaurant to open, my friend’s husband took a tour of the open house to see how the other half live. 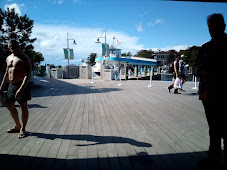 The restaurant was nice, it was nothing special other then being a Gay Heaven with scantly clad men walking around.

During the morning and early afternoon we got ready for an afternoon backyard party and in the late afternoon and early evening they had guests over for the picnic.

We went to a pool party at one of their friends that I had met before at a picnic at Fair Harbor on Fire Island, their I met a woman who we are friends together on Facebook for the first time. We were all fascinated over an “owl” they have next to their pool.

The party’s over and it was time to head home, after some discussion on the easiest way (Coming to their house my GPS took me through all these small towns and villages… (Go a half mile and take a left, in 300 feet turn right, then left…) and the way back I went on divided highways and was much more direct but slightly longer.) to get to the ferry I headed off. I had planned on an hour drive and be at the ferry about an hour/forty-five minutes before the 3 o’clock ferry that I had the reservations for but I was early and the 2 PM ferry was just leaving, so I was the first inline for my ferry. Which resulted in me being right at the stern of the ship.

As I left the ferry I pulled over to let my GPS updates my location (Once again the GPS showed that I was in the middle of Long Island Sound.) and the drive home was bad, there was no residual Memorial Day traffic.

It was a very good weekend, with good friends.

One of the things that was very nice was that everyone was cisgender and nobody had any problems with me being trans, everyone was warm and friendly.

I would recommend to anyone who is gay to go there, it is actually gayer than Provincetown! I didn’t see that many lesbians but as my straight friends said there is a lot of “eye candy” there to watch. I always wondered what the Pines were like and now I know.