Making Us The Scapegoats.

A theory that the recent outbreak of monkeypox may be tied to sexual activity has put the gay community in an unfortunate position, having fought back against previous and continued stigma around HIV and AIDS, an LGBTQ2S+ centre director says.

David Hawkins, executive director of the West Island LGBTQ2+ Centre in Beaconsfield, Que., told CTV News Channel on Saturday that the situation is frustrating, and he worries the conversation around monkeypox will indirectly impact and stigmatize the LGBTQ2S+ — lesbian, gay, bisexual, transgender, queer, two-spirit and other — community yet again.

And a newspaper in California wrote,


On May 24, the Sacramento Public Health Department said there is a likely case of monkeypox in the county, which would be the first reported case in California following international concerns regarding an outbreak.

“What we know about monkeypox is that while it is affecting the LGBTQ+ community globally, it is not a sexually transmitted disease and anyone can contract monkeypox through close personal contact regardless of sexual orientation,” Stonewall Democratic Club president Alex Mohajer said. “Attempts to make queer people the boogeyman by conservative politicians and politicizing the virus is dangerous and unacceptable, and an age-old tactic used to justify stripping rights away from minorities.”

Duffy said that when a contagious virus is falsely pinned on a single population, “we close off recognition of potential cases in other communities.”

The problem besides the obvious one that it stigmatize the LGBTQ community is that non-LGBTQ community do not take proper precautions because they think that the disease doesn’t affect them. Here is a flier from Fenway Health... 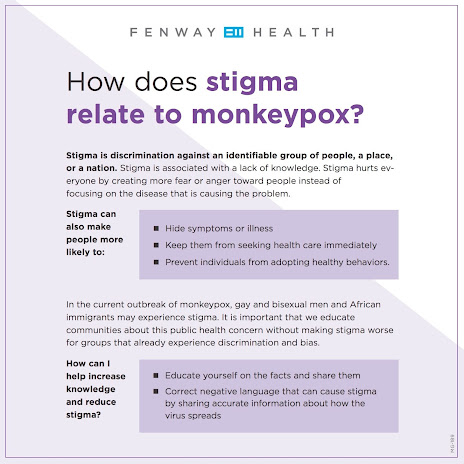 As they say the problem with stigmatizing a community is that the disease goes underground and people are less likely to report it and delay in going for treatment. Monkeypox is not a STD but rather more like Tuberculosis where it is spread by close prolonged proximity to an infected person.

So why are the conservatives spreading the lies?

For the same reason that they tried to spread the lies about COVID calling it the “Asian Flu” to demonize foreigners and generate hate against them. After Trump started to call COVID after that moniker hate crimes against Asian rose by 339 percent!