[Reprint from July 01, 2021
[This time when I went to Fire Island I brought a spare wig.]
Ever get rolled around in the surf?

Rolled up on to a the beach and deposited like some “flotsam” from a shipwreck?

Well I have on Fire Island in New York.

The day began bright and early at a couples house on Long Island, we had a long day ahead of us and I didn’t know the adventure that I had ahead of me that day. We were going to a picnic out on Fire Island in the town of Fair Harbor and here is My Story Part 127 from 2012…

But first, I had great time out on the island and I think I fell in love with Fair Harbor.

On Friday morning I drove down to a friend's place down in New London to leave my car with her and she drove me to the Orient Point ferry terminal. I had a nice trip across the sound over to Long Island on board the New London; the trip took an hour and twenty minutes to cross the sound. On the way we went by the Plum Island (Plum Gut) lighthouse and the Orient Point (Coffee Pot) Lighthouse. (click on image for a full size picture) 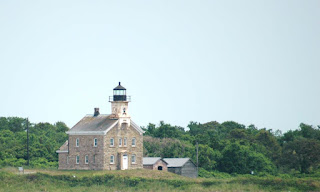 It was a very humid day where the ocean and the sky kind of blended together and you couldn’t tell where one ended and the other began. At the ferry slip at Orient Point, there was the car ferry and the high speed ferry that were heading back to New London.

When we docked, I was met by the wife of a couple that I know who live on Long Island and she drove me back to their house.

Saturday we drove out to the ferry to Fair Harbor on Fire Island, we were going to party at the island’s doctor's house. The house is used for a visiting doctor, the island residents invite a doctor to come out for two weeks free in return he is the on call doctor for the town (As I understand it). The couple that I was visiting, the wife sings with a group of people who sing traditional music on Long Island and the doctor’s wife is a member of the group. This is the ferry that we came over to Fair Harbor on… And the ferry slip. What surprised me was the speed that the ferry traveled, my inexperienced guess was 25 knots (compared to the Orient Point/New London ferry which I would guess traveled at 10 knots), we were passing out pleasure boats like they were standing still. I sat on the top deck with my friends and I was sheltered from the wind by the wheelhouse.

On the island there are no cars so the only way to get around is by walking or bicycling. The center of Fair Harbor is a the doctor’s office, the fire station, a general type store and a restaurant, all within about a hundred yards Around the corner is the food store and the walkway to the ocean (that is the ocean in the distance, about a quarter mile) and as you can see, bicycles are the main form a transportation. All the “street” are only four or five feet wide and all along the streets are summer cottages on lots that are around 90’ by 100’, some of them are nicely landscapes will others are hidden away behind hedges.

The streets are crowded with foot and bicycle traffic and if you have to carry something, you can always use a wagon. The doctor's wife met us at the ferry with a wagon and we piled the bags that we were carrying on it. They even had a place by the ferry to store your wagons...

In the afternoon I headed over to the ocean side to cool off in the ocean and the water temperature was just right, I could have stayed in it all day.

I was out in the water up to my waist, out pass where the waves were breaking and when a wave came in it usually rose up to my chest and when a big wave came in I jumped up to let it pass. I was enjoying myself with the group when… I looked up and there was a wave about two feet taller than me and it was starting to break… right on top of ME!

When I stopped being tumbled in the surf, I felt to the top of my head and my wig was gone!!!!! I frantically looked around for it, but I didn’t have my glasses on and I couldn’t see it anywhere. PANIC! Panic, panic… what do I do? How can I go back to the party? How can I go back on the ferry? PANIC!

What seemed like a life time went by (in reality it was only 4 or 5 minutes), this woman came up to me and said, “Is this yours or is it some type of seaweed?” Whew! Thank you, thank you, thank you! She was holding my wig down in the water. I was so embarrassed, I was it total panic mode. I don’t know what I would have done if she didn’t find it or if someone found it. 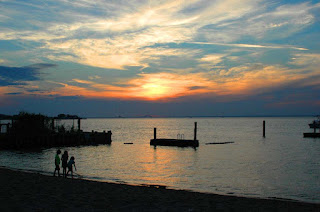 So the rest of the day was uneventful. We took the 9:30 ferry back to the main island after watching a beautiful sunset.


On Sunday it was another extremely humid day, we drove over to the north shore to Northport and walked along the walkway in the park. The bay was a forest of masts from all the sail boats.

Afterwards, we drove around the north shore and down a number of winding roads, past big estates nestled along the shore to we got to Huntington Harbor Lighthouse.

Today I came home on the 8:00AM ferry to New London, my friend came picked me up and brought me to my car. I was home by 10:30. It was a beautiful weekend and I enjoyed it immensely. As usual all my worrying before hand was for nothing. I survived the temporary lose of my wig and quickly got over it.

To this day she thinks that I was a cancer patient who had chemo.

#1 Bring a spare wig!
#2 Keep a spare set glasses in the car.
#3 When you thinks everything is going your way natural throws you a giant wave to knock you over.
#4 Some things in life are bad
They can really make you mad
Other things just make you swear and curse
When you're chewing on life's gristle
Don't grumble, give a whistle
And this'll help things turn out for the best
And
Always look on the bright side of life
Always look on the light side of life

Always Look on the Bright Side of Life
Monty Python

Email ThisBlogThis!Share to TwitterShare to FacebookShare to Pinterest
Labels: my story, vacation