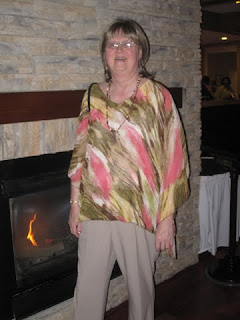 Saturday night was the annual Connecticut Outreach Society’s annual Banquet. This year I didn’t get all that dressed up, I was think about wearing my LBD, but I decided against it and instead I wore slacks and printed poncho (The photo of me was taken by Stana over at Femulate). As usual, I was running around during the day, going to the post office checking on any last minute banquet reservation and then to the bank to deposit the checks.

Then in the early afternoon while I was waiting in line at the bank, I noticed in my peripheral vision I had blind spots and a zigzag pattern aura… Damn! I was getting a migraine. I went home, took two Advil and had an orange in case my blood sugar was low. Put on an Eagles CD, pulled the curtains and laid down in bed, and slept for an hour. When I woke up the aura was gone and I only had a slight headache.

At the banquet I had a good time and left around midnight. For entertainment we had a comedian and I usually don’t like comedians, but she was pretty good and what I object to with comedians is that they usually put down someone or some group of people. But the comedian that we had didn’t, she didn’t pick on anyone or group of people. Instead she joked about things that we all do every day, that when you stop and think about it, it is pretty silly.

So anyhow, the banquet turned out good.