Changes In The Wind

The view of trans people is changing and mostly for the better and more religions are becoming trans inclusive.


How ‘Transparent’ is reshaping views of transgender Jews
Many gendered Jewish rituals will soon be reconsidered, one rabbi believes, from allowing people to self-identify their side of the mechitzah, to the inclusion of a female-to-male person in an Orthodox
Times Of Israel
By Avishay Artsy
January 3, 2016

LOS ANGELES (JTA) — The prevalence of transgender issues in pop culture seems to have reached a pinnacle this year.

Caitlyn – nee Bruce – Jenner appeared on the cover of Vanity Fair. The movie “Tangerine,” which stars transgender actors, took film critics by storm. Director Tom Hooper’s “The Danish Girl,” currently in theaters, tells the story of one of the first sex-change operations. And the second season of Amazon’s Emmy Award-winning “Transparent,” about a Jewish family coming to terms with their father’s decision to become a trans-woman, was released to raves on Dec. 11.

At the same time, the Jewish community is coming to terms with how to include transgender Jews in synagogues, workplaces, schools and summer camps. In November, for example, the Union for Reform Judaism unanimously passed a “Resolution on the Rights of Transgender and Gender Non-Conforming People.” It points out past efforts to include transgender people — the Hebrew Union College-Jewish Institute of Religion admitted its first openly transgender rabbinical student in 2003 — but concludes “there is more work to be done to make our Movement and our society fully inclusive of transgender and gender non-conforming people.”

According to the Williams Institute we make up just 0.5% of the population and a lot of times when we transition we go back into the closet and live our life in our true gender so you may even not know the person living next to you is trans.


“That means that for 84 percent of Americans, everything they know about transgender people, they learn from the media,” said Nick Adams, director of programs for transgender media at the LGBT media advocacy organization GLAAD and a transgender man. “For the past 60 years, trans characters have been portrayed as either psychotic killers, as in ‘Silence of the Lambs,’ or the butt of jokes, as in ‘Ace Ventura: Pet Detective.’” 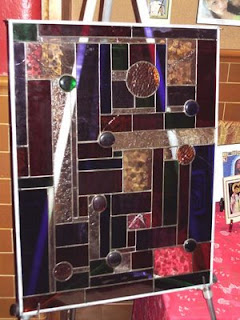 One year when we held the Transgender Day of Remembrance and a local rabbi, Rabbi Bremen brought the “Window of Hope” which is a window made up of shattered glass to symbolize Krystal Nacht, the night that the Holocaust began, the night they came for the Jews.

She talked so elegantly about the bigotry, hate and violence of that night and how they still exists today. How we must all fight that hatred as one and we must always be vigilant in our fight against the hatred and violence.

She went on to tell how the “Window of Hope” was made of glass from a Krystal Nacht service many years ago. Everyone had a piece of glass that they dropped on the floor to shatter in order to symbolize the breaking of glass that night 70 years ago. It was from those pieces, that they made the “Window of Hope.” One year when they were bringing the window to the Transgender Day of Remembrance some of the panes cracked and they debated long and hard on whether or not they should replace the shattered panes. They decided to leave it as is, to symbolize the continuing struggle against bigotry and hate and violence that our communities faces.


“The more it’s been talked about in popular culture, there has been more willingness of families and parents to try and understand when their child presents differently than ‘the norm,’” said Rabbi Denise Eger, the founding rabbi of Congregation Kol Ami in West Hollywood and a longtime LGBT rights activist. “We’re able to talk about it now earlier, before kids go through puberty, because we’re listening to the voices of our children, we’re listening to the voices of our families in our congregations, and we’re able to provide resources.”

The times they are a changing and more often than not for the better.