The Raw End Of The Deal

Many of you have seen that the railroad strike was averted by a law forcing a contract on them that doesn’t have any sick leave in it!


Most labor disputes never end up being debated in Congress. But thanks to a nearly century-old law that regulates labor relations only when it comes to railroads and airlines, what otherwise would be strictly an economic issue became a political one.

The Railway Labor Act was passed in 1926 as one of the very first labor laws in the nation. At that point most of the railroads already had been unionized, some all the way back to the mid-19th century. The structure was therefore set up to regulate labor negotiations between unions and management, rather than oversee organizing campaigns for new unions and additional members.

The House also passed a law that would give the unions paid sick days, addressing the issue they said led members to reject the deals. But the efforts to pass that same measure in the Senate fell short, even though 52 of 95 senators voted for it. The measure needed 60 votes to pass the senate.

And that is why it has no sick leave, they need 10 Republican votes. In today's political world there has to be compromise to get anything passed in Congress... for good or bad.

NPR wrote this about the railroad bills,

Six Republicans voted in favor of the Senate's paid sick leave effort and only one Democrat — Joe Manchin — voted against it.

"Basically I made sure that we voted not to increase inflation, not to put more hardships on the American public, especially in West Virginia, they couldn't — that piece of legislation had already been negotiated by the secretary of labor and the labor unions and the president, and I didn't think we should be interacting, because if we do, it'd never stop," Manchin said after the vote.

Railroads lobbied GOP senators to oppose the paid sick leave measure, arguing that congressional modifications to a contract would set a dangerous precedent.

“Unless Congress wants to become the de facto endgame for future negotiations, any effort to put its thumb on the bargaining scale to artificially advantage either party or otherwise obstruct a swift resolution would be wholly irresponsible and risk a timely outcome to avoid significant economic harm,” Association of American Railroads CEO Ian Jefferies said in a statement.

So why do the railroad billionaires hate sick leave?

That hundreds of million workers have? It is simple, it all boils down to greed.


For months, the world’s largest economy has been teetering on the brink of collapse because America’s latter-day robber barons can’t comprehend that workers sometimes get sick.

Or so the behavior of major U.S. rail companies seems to suggest.

Since last winter, railroad unions and the managers of America’s seven dominant freight-rail carriers have been struggling to come to an agreement on a new contract. The key points of contention in those talks have been scheduling in general and the provision of paid leave in particular. Unlike nearly 80 percent of U.S. laborers, railroad employees are not currently guaranteed a single paid sick day. Rather, if such workers wish to recuperate from an illness or make time to see a doctor about a nagging complaint, they need to use vacation time, which must be requested days in advance. In other words, if a worker wants to take time off to recover from the flu, they need to notify their employer of this days before actually catching the virus. Given that workers’ contracts do not include paid psychic benefits, this is a tall order.

All of which invites the question: Why do these rail barons hate paid leave so much? Why would a company have no problem handing out 24 percent raises, $1,000 bonuses, and caps on health-care premiums but draw the line on providing a benefit as standard and ubiquitous throughout modern industry as paid sick days?

P.S.R. is an operational strategy that aims to minimize the ratio between railroads’ operating costs and their revenues through various cost-cutting and (ostensibly) efficiency-increasing measures. The basic idea is to transport more freight using fewer workers and railcars.

One way to do this is to make trains longer: A single 100-car train requires less track space than two 50-car ones since you need to maintain some distance between the latter. More critically, one very long train requires fewer crew members to run than two medium ones.

Another way to get more with less is to streamline scheduling so that trains are running at full capacity as often as possible.

All this has worked out poorly for rail workers writ large. Over the past six years, America’s major freight carriers have shed 30 percent of their employees. To compensate for this lost staffing, remaining workers must tolerate irregular schedules and little time off since the railroads don’t have much spare labor capacity left.

In other words if you cut your employees to the bear minimum you maximize your profits but now all of your employees become critical workers and if one gets sick it can throw off your schedule and to a railroad schedule is everything!

The we have the pro-business Republicans... 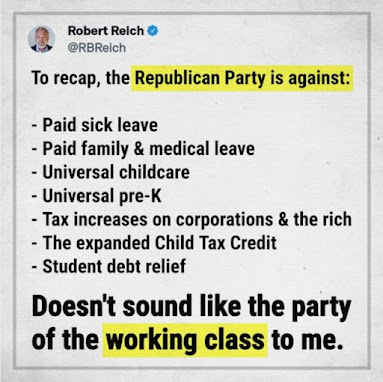 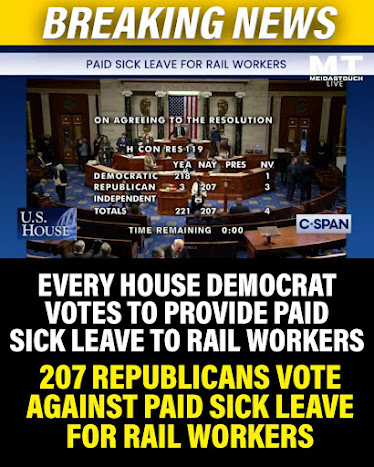 So don't blame the Democrats, they tried to pass paid sick leave by the Republicans blocked it so their billionaire railroad friend can make more money.