Is The Respect for Marriage Act Worth The Paper It Is Printed On?

I just read about the bill that passed the Senate and it looks like it was watered down to get it passed in the Senate.
What struck me as I read the what the bill covered is that it gives the states the right to legalize marriage equality and thought… “Wait a minute”, Texas and Florida and the other Republican states can not legalize marriage equality but they have to recognize other state marriages. In other words state A can not allow same-sex marriages next door state B allows it. A same-sex couple from state A can travel to state B and get married, and their marriage must be recognized by state A. My first thought was that is not quite so bad, but then I thought yeah but… what about a couple who can’t afford to travel to another state?
Pink News reported that,

It is a step in the right direction.
The bill also…

The bill also has an amendment, accepted on Monday (28 November), which protects religious liberty, and confirms that no nonprofit religious organisation [sic] would have to provide goods, services, or facilities for wedding ceremonies or receptions.

That is overly broad exemption.
So if a Christian adoption agency is the only adoption agency in the county a same-sex couple couldn’t adopt a child unless, once again, travel to another party of the country.
Our senator said,

“Every person deserves the right to marry who they love. Thankfully, this is the clear consensus position in America today, and it’s why marriage equality has been the law of the land in Connecticut for over a decade. This legislation is unfortunately necessary to protect marriage equality from increasingly radical Republican judges and ensure that no one faces discrimination because of who they married.”

Yeah, I realize there is the reality to today’s political climate that they had to compromise and he wants to paint it in a “good light.”
Meanwhile most of the Republicans voted against the bill and some introduced "killer amendments" designed to scuttle the bill. Fox News wrote,

Texas Senator Ted Cruz, a Republican, introduced an amendment to the Senate gay marriage bill regarding what he says are the risks of allowing child marriages, polygamous marriages, and incest that could arise from the legislation.
[...]
"Not only does the so-called Respect for Marriage Act open the door for a weaponized IRS to target religious non-profits, but it will start a race to the bottom, forcing the most extreme marriage laws from any state onto every other state," Cruz said.
"It will only take a California, New York, or Massachusetts to legalize polygamy, incest, or child marriages to force every state to recognize these relationships as well," the senator continued.

We heard that old argument about legalizing polygamy, incest, or child marriages back a decade ago when marriage equality bills were being introduced, it wasn't true then and it is not true now. Then we have Sen. Cruz's other comment one state recognizing another state's laws, well he can't be much of a lawyer if he doesn't know the Constitution...

Article IV, Section 1: Full Faith and Credit shall be given in each State to the public Acts, Records, and judicial Proceedings of every other State.

THE SENATE’S SAME-SEX MARRIAGE VOTE IS MONUMENTAL—AND IMPERFECT
The Respect for Marriage Act shows immense progress around marriage equality. It also comes against a disturbing backdrop of violence against the LGBTQ community and dangerous political attacks from influential right-wing leaders.
Vanity Fair
By Eric Lutz
November 30, 2022
It was only a decade ago that Barack Obama finally publicly expressed his support for same-sex marriage. His vice president, Joe Biden, had already gone off script and said that same-sex couples should be “entitled to the same exact rights, all the civil rights, all the civil liberties” that heterosexual couples enjoyed. At the time, Biden’s remarks were cast as a “gaffe” in some corners. It was during Obama’s reelection campaign against Mitt Romney, who as the presumptive Republican nominee back then had said definitively, “I believe marriage is a relationship between a man and a woman.” But the issue didn’t drag down Obama and Biden in that year’s election, as some aides had feared, and the Supreme Court would make same-sex marriage legal across the country three years later with Obergefell v. Hodges.
There’s been a major shift in American politics around marriage equality in the years since, as the Senate vote on the Respect for Marriage Act underscored Tuesday. Led by Democrat Tammy Baldwin and Republican Susan Collins, a bipartisan majority in the upper chamber passed a bill protecting same-sex and interracial marriages at the federal level, amid concerns that the Supreme Court’s 6-3 conservative majority could overturn those precedents the way it overturned Roe this summer. Every present Democrat and 12 Republicans, including Romney, voted for the landmark legislation, which is expected to pass the House and be signed into law. “For millions of Americans, this legislation will safeguard the rights and protections to which LGBTQI+ and interracial couples and their children are entitled,” Biden said in a statement Tuesday, praising the lawmakers in the Senate who brought what had originally been seen as something of a messaging bill over the finish line.

In the light of an “iffy” Supreme Court, therefore the question is; “Is a half a loaf better than no loaf?”
These are the Republican senators who voter against the bill; 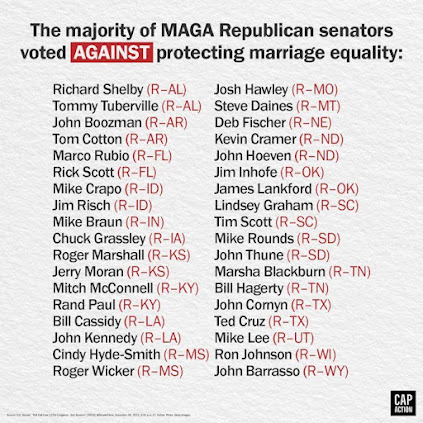 Democrats succumb to political reality on same-sex marriage bill
The Hill
By Brooke Migdon and Al Weaver
November 29, 2022
The Senate’s Respect for Marriage Act has progressives arguing that efforts to safeguard same-sex unions remain unfinished after concessions were made to Republican demands for bolstered religious liberty protections.
The bill as it currently stands would officially repeal the Defense of Marriage Act and require state recognition of legal same-sex and interracial marriages but would not codify the Supreme Court’s 2015 ruling in Obergefell v. Hodges that legalized same-sex unions nationwide or prevent the high court from eventually overturning the landmark decision.
“It would be great if the bill went further, but we don’t have the votes for the bill to go further,” Sen. Brian Schatz (D-Hawaii) told Changing America.
[...]
Naomi Goldberg, deputy director of the Movement Advancement Project, which tracks state and federal legislation affecting the nation’s LGBTQ community, told Changing America that the legislation was also constrained by the Constitution.
The bill “does not require that every state allow same-sex couples to marry – the federal government can’t do that constitutionally,” she said. “What the Respect for Marriage Act would say is that you must recognize valid marriages regardless of sexual orientation, national origin and race.”
“What’s important,” Goldberg added, “is that it doesn’t touch the current statutory or constitutional patterns that exist in the majority of states. Those are still on the books.”

It is a possibility that the Supreme Court could strike down both the previous Supreme Court ruling and the new law as an infringement of "States Rights" even through banning marriage equality violates the Fourteenth Amendment.
Posted by Diana_CT at 3:00 PM