I Think That I’m Going To Gag!

Because of "Gays Against Groomers" (GAG) an anti-LGBTQ+ group.

For many of us, the anti-LGBTQ hate group "Gays Against Groomers" burst into the public eye in the aftermath of a tragedy.

Just days after the horrific anti-LGBTQ violence at Club Q in Colorado Springs, the founder of "Gays Against Groomers" set off a firestorm when she hatefully told Tucker Carlson that she expects these shootings will continue "until we end this evil agenda" of gender-affirming care.

"Gays Against Groomers" and its sister organization "Trans Against Groomers" claim to represent LGBTQ people who want to protect children from alleged abuse. But in reality, they function as a front group for MAGA-rooted bigotry: smearing LGBTQ folks who teach inclusivity in schools as "groomers," attacking Pride celebrations in schools, and harassing health care workers who provide gender-affirming care.

Both PayPal and Venmo have banned "Gays Against Groomers" over its promotion of hate speech and violence. But Donorbox -- an online platform that helps non-profit organizations raise money -- is now letting the hate group solicit donations using its tools.

Anti-LGBTQ hate and violence are on the rise, and too much of it is being perpetrated in Jesus's name. As Christians, let's stand with the queer and trans community and tell Donorbox to stop funding hate now.

My first thought was about the name "Gays Against Groomers" was “Oh they are against Trump and the Republican party! 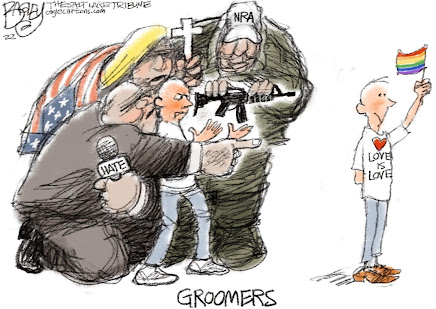 Unfortunately, hate runs in families, it is taught from one generation to another and it is the right-wing conservatives who are groomer the next generation of bigots.

I even know of a number of trans people who voted Republicans, they have no empathy for their fellow trans people. Even here in Connecticut the Republican gubernatorial endorsed “Parental Rights” a code word for being able to discriminate against us. To be able to ban LGBTQ+ books in schools, to prevent teachers and students from mentioning anything LGBTQ+, and to ban us from sports and bathrooms.