A Year In Review

I think for me the high point of the year was the passage of the birth certificate legislation and being invited to the bill signing.

Here is my Christmas letter,

Wow, another year has gone by! It seems like the year went by in a blink of the eye.

It was another busy year, it felt like I am busier in retirement than when I was working. I probably on average did a least two training session a month and I also did a number of guest lectures at universities at UConn, Quinnipiac University, and Albertus Magnus College. I have a friend who worked in CT Department of Education before he retired and is now teaching a class on multicultural education and when he gets to the part on gender identity and expression he lets me teach the class. All the rewards of teaching without the grading of papers.

I also was part of the coalition that helped pass a new law that allows the gender marker birth certificates to be changed without surgery, many trans people cannot afford the surgery or may have a medical condition that rules out surgery. The high point was when I went to the bill signing in the governor’s office. 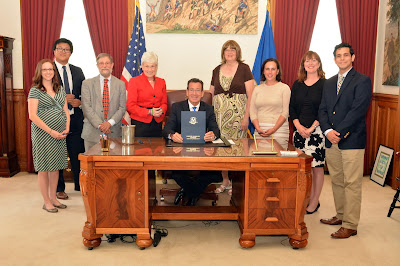 I have also been going around the state doing training for homeless shelter staff and 211 operators; so far we did four training sessions with four more to go. Then earlier this month I gave a speech at Norwalk City Hall the anniversary of the United Nations Declaration on Human Rights.

On the fun side I went to a couple of plays at the Goodspeed Opera House in East Haddam, “La Cage aux Folles” and “It’s a Wonderful Life” and “Christmas on the Rocks” at Theater Works in Hartford. I love plays; nothing beats a live preference.

I also got to go to see Laverne Cox when she came to UConn as a guest of UConn. We had a buffet given by the UConn Rainbow Center and the Alumni Foundation and then we went over to the Jorgensen to listen to her. We had reserved seats right up front. I felt guilty walking up ahead of everyone, but feeling guilty didn’t last long. Then afterward we had our picture taken with her. 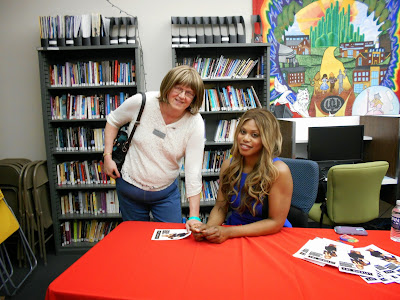 I didn’t go out to Fire Island this year, the person who usually has the party was sick so there was no party there this year. But I did go to the annual party uniTy in Jacksonville VT and then I headed up to the cottage afterward. We got a lot done on the cottage this year, or rather my brother did, he wants to sell in two years and I’m thinking about using my half to buy a condo on the Cape Cod.

Speaking of the Cape I was up in Provinctown for a week in October for a trans conference called Fantasia Fair and I took a number of trips around the area taken photographs and I even saw a whale. I was at Race Point when a whale breeched and dived, it was impressive seeing a whale out of the water so close to shore. But it didn’t do it again while I had my camera out.