You all have heard how the Republicans say that we need to cut Corporate taxes to stimulate jobs.

WASHINGTON -- It will be hard for Republicans to attain their goal of lowering the top corporate tax rate to 25 percent if they want to pay for it solely by eliminating business tax breaks, a preliminary report by Congress' nonpartisan revenue scorekeeper suggested Wednesday.

The study by the Joint Committee on Taxation found that erasing corporate deductions and credits would save around $960 billion over the next decade, only enough money to lower the top rate to 28 percent. The current top rate is 35 percent.

Well let’s look at how the corporations are using all their cash that they have piled up. 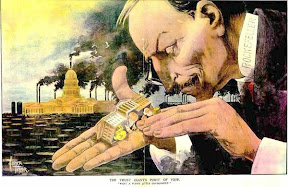 When Pfizer cut its research budget this year and laid off 1,100 employees, it was not because the company needed to save money.

In fact, the drug maker had so much cash left over, it decided to buy back an additional $5 billion worth of stock on top of the $4 billion already earmarked for repurchases in 2011 and beyond.
[…]
The result is that at a time when the nation is looking for ways to battle unemployment, big companies are creating fewer jobs, and critics say they are neglecting to lay the foundation for future growth by expanding into new businesses or building new plants.

What is more, share buybacks have not fulfilled their stated purpose of rewarding investors over the last decade, experts say. “It’s a symptom of a deeper problem, which is a lack of investment in the long term,” said William W. George, a Harvard Business School professor and former chief executive of Medtronic, a medical technology company. “If we’re not investing in research, innovation and entrepreneurship, we’re going to be a slow-growth country for a decade.”
[…]
Last month, the first layoffs began at Zimmer’s plant in Statesville, N.C., which is due to shut early next year. The company made splints and tourniquets there for more than three decades. For the sewing machine operators and the rest of the 124 workers at the plant, it is bad news, but it is a different story for Zimmer’s top executives.

Powered by huge stock buybacks — the company bought $500 million worth of its own shares last year, more than twice what it spent on research and development — Zimmer posted earnings growth of 10 percent a share, even though operating income and revenue grew by less than 5 percent in 2010.

That helped its senior management, including the chief executive, David C. Dvorak, collect millions in cash and stock incentive payments by meeting earnings-per-share goals. For example, 50 percent of Mr. Dvorak’s $1.03 million cash bonus was tied to achieving per-share earnings of $4.28 in 2010. The company earned $4.33, but without the share repurchases the company would have made $4 to $4.10 a share.

Oh yes, we see where all the money is going to the 1 percenters. Not to the workers, not to the stockholders but to the rarefied few, to corporate bosses.

But when they do hire new employees, where are they hiring?

U.S.-based multinational corporations added 1.5 million workers to their payrolls in Asia and the Pacific region during the 2000s, and 477,500 workers in Latin America, while cutting payrolls at home by 864,000, the Commerce Department reported.
[…]
The data show the dramatic changes in the nature of globalization during the past decade, when U.S.-based multinationals concentrated their growth opportunities abroad. And it is likely to become fodder in the political debate over U.S. and foreign corporate tax codes and policies aimed at encouraging companies to produce more jobs at home.

I want you to remember one other thing, do you remember last year when the Supreme Court ruled that corporation could spend unlimited amounts of dollars on US election?

Are corporations the same as people?
Miami Herald
BY Perry Stein
November 26, 2011

When the Supreme Court made its landmark 2008 ruling in the case Citizens United v. Federal Election Commission, political warfare was unleashed. It became known among some as the “corporations are people, too” ruling.
[…]
“I thought the Supreme Court had moved in a direction that was completely counter to the intention of the founders,” said South Miami Mayor Philip Stoddard, who first introduced the resolution to his city in October. “The Founding Fathers were suspicious of corporations.”

The two cities called for a constitutional amendment to redefine the word “person” to exclude legal entities.
[…]
Elizabeth Price Foley, a professor of law at Florida International University, said these types of resolutions mean absolutely nothing in the court law, but could hold carry some weight in the court of public opinion.

“To the extent there is an effect from this, it’s in the court of public opinion,” Price Foley said. “It’s part of a larger societal debate about an important Supreme Court decision.”

How do you think corporation will use their money to influence the elections, for the good of the country or to line their pockets with more cash?
Posted by Diana_CT at 7:42 AM