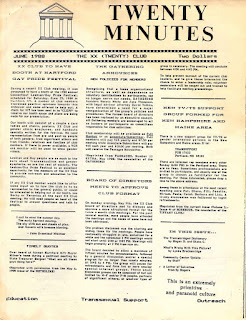 The Twenty Club was a Transgender peer support group that began in 1971. It was the longest continuous trans support group in the nation. It got its name from the two XX chromosomes that genetic women possess.

I first attended XX Club in 2002 and the following is mostly from my memory.

The group was founded by the Reverend Canon Clinton R. Jones and Project H in the mid-sixties and was also affiliated with the Gender Identity Clinic of New England (GICNE). At the meeting of Project H there were members who were saying that they felt like that they should have been born a woman. As their numbers increased, Rev. Jones began working with Dr. George Higgins, a professor at Trinity College, and Dr. Snow, from Mt. Sinai Hospital. Later on, they worked with Dr. William Petit and Kathleen Sterner. They realized that besides the clinic they needed a support group to augment the clinic, so in 1971 The Twenty Club was started. The first meeting took place at Christ Church Cathedral on Church St. in Hartford.

This is where I first started attending meetings. There were members coming from all over southern New England and eastern New York because The Twenty Club was the only support group for trans people in Southern New England. The meetings were moderated by Rev. Jones. However, the members mainly ran the meeting and Rev. Jones let us run the group.

One of my best memories of The Twenty Club was the holiday dinners which were in December and
the summer picnics at Stratton Brook State Park. You could always count on rain during the picnic. One time we had a hurricane during the picnic! The holiday dinner and the picnic always had a good turnout with 20 or 30 members or former members attending. Many of the former members would show up to renew old friendships and it was great to talk to trans women who had successfully transitioned.

In 2003, when Rev. Jones retired the meetings moved to Project 100, the Hartford LGBTQ Community Center, and then to the Hartford Gay & Lesbian Health Collective in 2007. The Twenty Club was not a perfect fit for all: one of the issues people had with GICNE and the Twenty Club was that it catered to white middle income trans women. Minorities and trans men attended that meetings but they never stayed long. Also, it was very expensive to be a client of GICNE as it was not covered by health insurance.

Over the years attendance has dwindled as trans people achieved greater acceptance, more resources are available now and the growth of trans visibility all contributed to the decline in membership. The Twenty Club will be missed by many.

Many thanks to Ben Powers at the Sexual Minority Archives for his help. Additional information was from the Digital Transgender Archive and the Hartford Courant article “A Quiet Pioneer in Gender Counseling”.

Like an unchecked cancer, hate corrodes the personality and eats away its vital unity. Hate destroys a man's sense of values and his objectivity. It causes him to describe the beautiful as ugly and the ugly as beautiful, and to confuse the true with the false and the false with the true.
Martin Luther King Jr.
We can disagree and still love each other, unless your disagreement is rooted in my oppression and denial of my humanity and right to exist
James Baldwin
The world will not be destroyed by those who do evil, but by those who watch them without doing anything.
Albert Einstein