1) The "Boulevard of Broken Dreams" video begins with the gentlemen of Green Day dealing with car trouble. If your car overheated, what's the first thing you would do to remedy the situation?
Buy a new car. Who wants a car that overheats!

2) Thinking of cars, lead singer Billie Joe Armstrong has had his share of trouble behind the wheel and was busted for driving well beyond the speed limit. Was your last ticket for parking, or was it a moving violation?
It was a parking ticket about 10 years ago, who knew that you had to on Saturday.

3) Billie Joe says "Boulevard of Broken Dreams" was inspired by the Edward Hopper painting, "Nighthawks." Tell us about a piece of artwork that you enjoy. (Yes, the macaroni picture frame created for you by your nephew counts.)
I love Hudson River School and Impressionist paintings and this is my favorite painting. The painting is at the Wadsworth Atheneum, I think the name of the painting was Nemesis and I don't remember the the painter (I just found out that this is "On the yacht 'Namouna'“, 1890 by Julius LeBlanc Stewart thank you Zippi Kit} but it was a American Impressionist in France, painting from the turn of the century (not this one but the 1900’s) 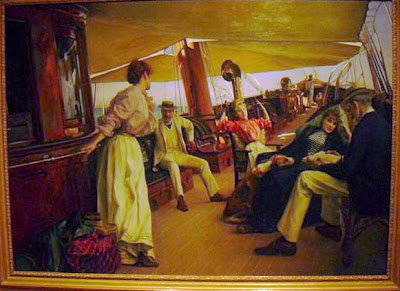 4) Let's go back to childhood. Was the home where you grew up located on a boulevard, an avenue, a street, a lane or a road?
Boulevard but it really was just an ordinary street.

5) This song won Green Day a Grammy for Record of the Year. What positive feedback have you received recently?
I was a guest lecturer at Albertus Magnus College (A small Catholic College in New Haven) on Tuesday before Thanksgiving and this is the feedback from class that I received from the professor that taught the class on Multicultural Education. This is from one of the student’s journals…


After meeting Diana during Tuesday’s class, I immediately thought about my personal reflection paper and what lessons where taught to me growing up in church and in my family. In all honesty, I never thought I would ever have a lengthy conversation or receive a lecture from someone transgender just based on my upbringing. The lecture was extremely informative and I particular liked how Diana talked a lot about how this affects children and how transgender children are coping with an ongoing battle of feeling like they were born in the wrong body. Listening to the story of Jaz, who was born as a boy but truly wants to be a girl, really made me stop and think how hard it must be to feel this way. I think Jaz is extremely brave to tell her story and more importantly her story gave me a lot to think about as an educator and how our laws need to protect all kids especially from bullying and feeling ostracized. The biggest reflection I have this week after meeting Diana and partaking in the discussion, is being a bit more consciousness about my own nonverbal language and body language. I’m aware that when I feel greatly frustrated or even uncomfortable, I often smile (for no good reason) as a way not to show my true emotions, but this made me think about how much our body language and facial expressions are just as effective as microaggressions. Diana talked about microaggressions and comments that are made towards those that are transgender and I thought it be would equally important to include facial expressions and body language under that same umbrella. Per the readings, and basic common sense, I hope that if I ever had a student like Jaz, that I would never say anything offensive but being cognoscente of my body language is just as important if not more so. Children pick up on all types of subtle messages and subliminal cues and our class this week made me really think a lot about that.

6) Green Day uses their Facebook page to let more than 32 millions know what the group is doing. What's the last thing you posted to social media?
This blog post.

7) In 2004, when this song was popular, Ken Jennings had a still unbeaten string of 74 wins on Jeopardy! What game show do you think you'd do well on?
I think I would do very well on Jeopardy except for movie trivia.

8) Also in 2004, Lance Armstrong was in the midst of his own Tour de France winning streak. Now we know he cheated. Tell us about a time you broke the rules.
I usually don’t break the rules… except for speed limits. The other day I had to drive up to UConn’s main campus in Storrs and I got stuck in traffic around Hartford. I did 85 mph to make up for lost time, but in my defense I was keeping up with traffic.

9) 2004 is when Morgan Spurlock released Super Size Me, his documentary about eating nothing but McDonald's for a month. What's the last fast food restaurant you visited?
It was at Burger King when I came home from UConn Thursday night, it was 8 o’clock and I didn’t feel like cooking.