The ACLU and NAACP are reminding voters that a photo ID is not required to vote in Connecticut. Voters can present a credit card or utility bill -- or even simply sign a form attesting to their identity, unless they are first time voters.

"Many people don't have government-issued photo identification and they need to know they can vote without it in Connecticut," said Andrew Schneider, executive director of the ACLU of Connecticut. "This year, we're also concerned about people who have driver's licenses or passports but lost track of them in the hurricane."

For more information about the law in Connecticut about vote visit the Secretary of State website for what you can use in CT for voter ID, here.

The Secretary of State website also has pages that has a voter guide and about your rights as a voter,


The Connecticut Voter’s Bill of Rights

This document summarizes some of the basic voter rights laws enacted in the State of Connecticut. It applies to people with and without disabilities. It is important that all voters become familiar with these rights.

The Connecticut Voter’s Bill of Rights assures that you have a right to:

*  Applies only to elections when there are candidates for federal office on the ballot. (Connecticut General Statues §9-236b)

For many trans-people they fear intimidation and the voting booth, they dread being challenged by poll watchers and it is a real fear. I was challenged when I went to vote in 2008, a poll watcher didn’t believe my driver license was me even though it had my legal name and gender (Diana and female) on the license.  Also  in Virginia an organization is training poll watchers to challenge trans-voters in a project that they call “True the Vote” and they are fraudulent voters and should be not be allowed to vote. This is the flyer that they are giving out… 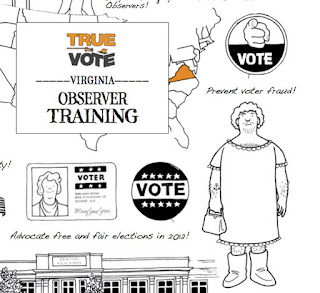 
STEPS EVERY TRANS PERSON SHOULD TAKE NOW
1. Make Sure You Are Registered to Vote
Make sure you are registered to vote in the correct precinct and that the name and address (and, if specified, gender) in your registration record match your ID. If they do not, register with information that matches your ID. Remember, if you get a name change, you must change your name on your voter registration information. Keep your registration card or certificate when it gets mailed to you.
Make sure that you are registered at the correct address with the correct name.
And don’t assume that your ID is good because it always has been in the past.

To check your voter registration status or register to vote:

2. Get a Photo ID If Your State Requires One
If your state requires a photo ID and you don’t have one of the required forms of ID, get one. Most states with ID requirements will accept more than one type of ID; figure out which is easiest to obtain and get one. Some states will provide a required ID free of charge to those with a limited ability to pay, and some community organizations may be able to help you with other barriers such as transportation.

3. Update Your Photo and Gender Marker On Your ID, If Possible
If it is possible for you to do so, having an updated photo and gender designation can lessen the risk of encountering problems. If you are unable to do so, however, you still have the right to use your ID to vote, even if a poll worker tells you otherwise. (In some states it may be easier to obtain a U.S. passport card or book with updated gender information; however, not all states accept passports as a form of voter ID.)

4. Update or Verify Your Voter Registration Information
Make sure your ID will match the name and address on your voter registration at election time.

If you change your name or address between registering and voting, this can cause problems. If you do change either of these things before Election Day, make sure to go back and update your voter registration as well.

5. Find Out If You Can Vote Early
Learn more about whether early and absentee voting is available in your state. Each state has different laws about whether and how someone can vote early. Early voting is often a way to avoid hassles and other problems at your polling place on Election Day.
6. Call Your Local Election Office
If you are still in doubt, verify with your local election office. If you have questions about your ID or the requirements in your state, call or visit your county election office before Election Day. You can even ask them to check the ID you intend to use and verify that it is sufficient for voting.

Many people say that we need voter ID laws to protect the election, but they offer no evidence to back up that claim and as a matter of fact evidence shows the opposite is true. A study done during the Bush administration found,


Indeed, voter fraud is exceedingly rare today. A high profile voter fraud initiative by the U.S. Department of justice the Bush Administration resulted in only 40 prosecutions for elections crimes relating to illegal voting nationwide between 2002 and 2005.

And in Pennsylvania which is trying to have the nation’s toughest Voter ID law, officials said in court case against the law,


In a stipulation agreement signed earlier this month, state officials conceded that they had no evidence of prior in-person voter fraud, or even any reason to believe that such crimes would occur with more frequency if a voter ID law wasn't in effect.

In truth all this drum beating about voter fraud is just another way for the Republicans to rig the elections, in fact they actually boasted about it,

So when you hear someone talking about voter fraud ask them to name just one case of voter fraud. It is not right to deny hundreds of thousands of people their right to vote based on 20 cases nationally in four years.

Poll watchers from groups ostensibly targeting voter fraud are headed primarily to minority voting precincts on Election Day, lending support to the argument that their real goal is to suppress the African-American and Latino vote.

A partial list of precincts targeted by a Pittsburgh Tea Party group working on behalf of the Republican Party shows that nearly 80 percent of the voters in those precincts are African-American, compared to 13 percent countywide, according to civil rights and union groups who on Monday called on the U.S. Department of Justice to investigate.
[…]
A spokesperson for True the Vote, which vowed to send a million poll watchers out to hunt down voter fraud, did not respond to an email inquiry. Its founder, Catherine Engelbrecht, told The New York Times that she suddenly became concerned with voter fraud after President Barack Obama's election in 2008. "I don’t know, something clicked,” she told the Times.

Marshall pointed out that none of the groups has provided evidence of in-person voter fraud anywhere -- and groups have not provided evidence "to back up exactly why they should send all their poll watchers to African-American neighborhoods." Lacking that evidence, he said, "we have concerns as to why they're sending them to those locations.

With the election so tight, every vote will count. The more voters from the other party that you can intimidate, the likelier your candidate will win. And the Republicans are doing everything that they can do to disenfranchise Democratic voters.
Posted by Diana_CT at 11:13 AM