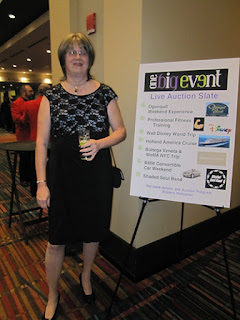 The One Big Event fundraiser for the Hartford Gay and Lesbian Heath Collective was very nice, the new venue was great and the food was a lot better than where they had it last year. I heard the final count was around 500 attendees and last year they only had a little over 300 because of the size of the banquet room. This year the room was humongous and they had about sixty tables, stage  and a dance floor. The only drawback was the sound system by the time the sound reached us it was mumbled, they need better acoustics.

I meet a lot of people there that I knew, some of which were my former classmates, and the Health Collective staff. Plus a number of people that I know from my work with CT TransAdvocacy Coalition.

The band was called “Shaded Soul Band” and they were very good, but once they started it was time for me to leave the banquet. One, I don’t like loud music (I much prefer acoustical music)  and two, I was up at 4AM so I wanted to get home by 11.

Now the bad news, I was up in the Springfield area this afternoon and on the way home I got a flat tire. That was my first flat tire in probably 40 years and I’m much older now then I was back then. I had the car jacked up and the lug nuts removed but I couldn’t get the wheel off of the drum. I was pulling and pulling and it just wouldn’t come off when a nice young man pulled up and asked if I needed help… yes! He took off the wheel (He just lifted it right off and I joked that I loosen it for him.), put the spare and the lug nuts back on, put the flat in the trunk and lowered the car jack. Thank you! Thank you! Thank you!