It is Thursday so it must be time for “My Story” a weekly series of blog posts about my transition and observation of life as a trans-person.

I did an outreach at a community college yesterday, the second one this week. I do them not for myself but for the next generation maybe they will have it a little easier than I had it. I know outreach is not for everyone, but I enjoy doing them and I use to joke that it is cheaper than a therapist. I did the outreach with two gay men; however, the class didn’t ask any questions so we made up our own questions. The guys were two former teachers and they were very good and I got some good pointers from listening to them. One of them brought in a prop, a spoon and I wondered what he was going to do with it.

Well he started out his introduction talking about when he was a baby and he always grabbed the spoon with his left hand. His mother always took it out of his left hand and put it in his right hand. He then went on talking about how people use to think of left-handed people as sinister (sinister actually means left side) and he then asked the student when did you choose to be right handed.

I’m sinister, I never chose to be left-handed but I was born that way and I faced the same discrimination that all left-handed people face. What you say, left-handed people don’t face discrimination! Well you never had tried to use a pair of scissors left-handed, you never tried cutting cheese with a right-handed knife with you left hand (the serrated edge is left and if you use your left hand it forces the knife out of the slice) or just try writing with an ink pen. I use to get my hand slapped all the time by the nuns for smudging the ink (thank goodness for ballpoint pens).

Anyhow, he made his point, we don’t choose which hand we use and we don’t choose our sexual orientation or gender identity. We don’t know why a person is left handed just like we don’t know how our sexual orientation or gender identity is formed. We have some ideas of why*, but we have nothing that we can point a finger at and definitively that is the cause.

He then talked about the Kinsey Scale and explained that there are no true heterosexuals and no true homosexuals, that it was continuum on a scale of zero to six. How in nature there is no black and white. I took that for my clue and told them how we put all the scales together to form this… 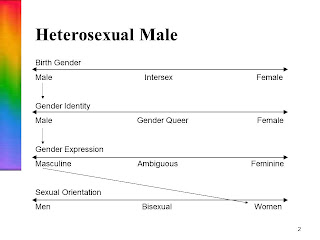 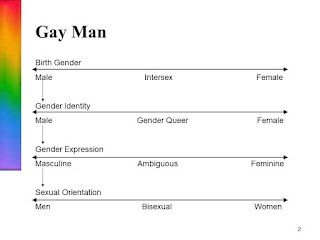 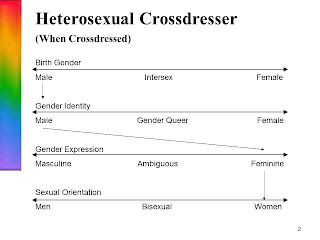 And this is how I would be mapped… 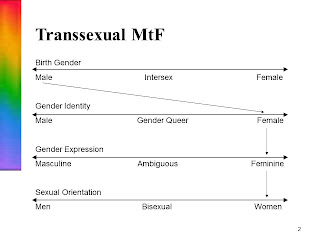 As you can see there can be an infinite number of combinations, there are no black and whites in nature, but a blend of grey.

*There are a number of interesting studies about the relationship between sexual orientation, gender identity and left-handedness. I first became interested in that relationship when I was gathering signatures for the gender inclusive anti-discrimination bill at the True Colors LGBT Youth conference, noticed that it seemed like the majority of the people inline were left handed. It was very noticeable and I know that shouldn’t be, that it should be somewhere around 20% to 25% of the people. However, it seemed like it was over 50%.

I found this study online,

ScienceDaily (July 10, 2000) — Three Canadian researchers have shown that left-handedness is more common in gay men and in lesbian women than in comparable heterosexual persons. Drs. Martin L. Lalumière, Ray Blanchard, and Kenneth J. Zucker, of the Centre for Addiction and Mental Health (CAMH) and the University of Toronto, reached this conclusion by means of a meta-analysis -- a statistical technique for combining the results of many previous studies in order to reach a reliable conclusion.

The study, published in the July issue of Psychological Bulletin, combined the results from 23,410 heterosexual and homosexual men and women. The results for both sexes were statistically significant; however, the tendency toward increased levels of left-handedness was markedly greater for lesbian women than for gay men.

So research seems to bear out my non-scientific observation.