One of the hardest thing to figure out of they are ignoring you because they do that to everyone or because you’re trans.
Up at the Cape I am looking for a landscaper and I posted an inquiry on the town Facebook page and I have been working my way down the list with no luck so last week I contacted #5 on the list via Facebook.
The exchange went like this… 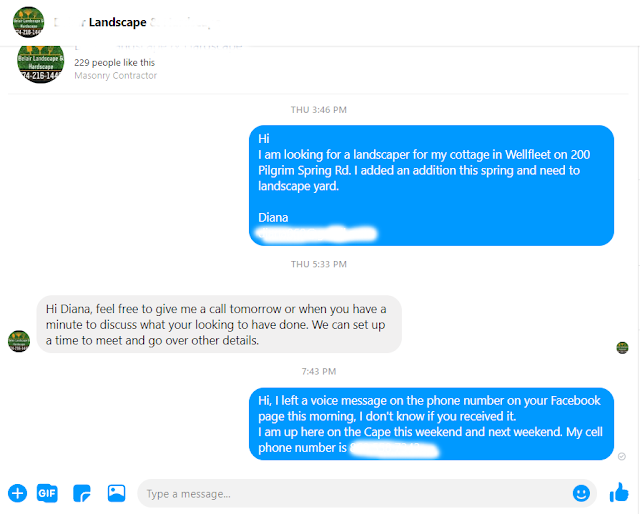 Why did he go from all enthusiastic to a cold shoulder?
Did he look at my profile and found out that I am trans?
So what do you think? Was my money not green enough?
find bike trails
I think this illustrates just how hard it is to prove discrimination without him actually coming out saying that he did it because I’m trans. We might know it is discrimination but how do you to prove it in court.
That is one of the drawbacks of non-discrimination laws they are very hard to prove unless they are really stupid and come out and say it… it is because you’re trans, black, or non-Christian. When you are looking for a job and they said you are not a good fit, over or under qualified for the job or they never get back to you, you might know it is discrimination but how can you show it?
Human Resources get training in just this type of discrimination. Heck even non-discrimination training teaches you what is right or wrong and it doesn’t take to much to realize how to get around it if the company or the individual is so inclined.
P.S. I had someone who has been mowing my lawn for the last two years and he replied to my inquiry on the town Facebook page saying he also had a landscaping job I said to stop be and we could go over what I wanted done. Well he never replied and not only that he stopped mowing my grass. I have to wounder if he say my Facebook page.
A sad milestone this week…

The number of trans people murdered in 2020 just surpassed the total for last year.
It’s only been seven months Fears of a growing “epidemic” of violence against the trans community were seemingly cemented this week as the number of trans people in the US murdered this year surpassed the total for all of 2019, one of the country’s top trans rights groups said Friday (August 7).
Pink News UK
By Josh Milton
August 8, 2020
In the US last year, the National Center for Transgender Equality said in a blog post, 26 trans, non-binary gender non-conforming people were fatally killed.
In just seven months, the figure has been surpassed in 2020, with 28 trans folk slain.
Against a backdrop of an unprecedented public health catastrophe, a cratering economy, a booming call for racial justice and the steady rollback of already flimsy LGBT+ rights, trans people have suffered the brunt of this multi-pronged crisis.
[…]
“Transgender people – and particularly Black and Latina transgender women – are marginalized, stigmatized and criminalized in our country,” said Rodrigo Heng-Lehtinen, the organisation’s deputy executive director. “They face violence every day, and they fear turning to the police for help.”
[…]
“No one should be forced to live in fear.”

Unfortunately in today’s climate bigotry and violence are running unchecked. The current administration has thumbed it’s nose at the Supreme Court and Congress with impunity.