Hedwig And The Angry Inch 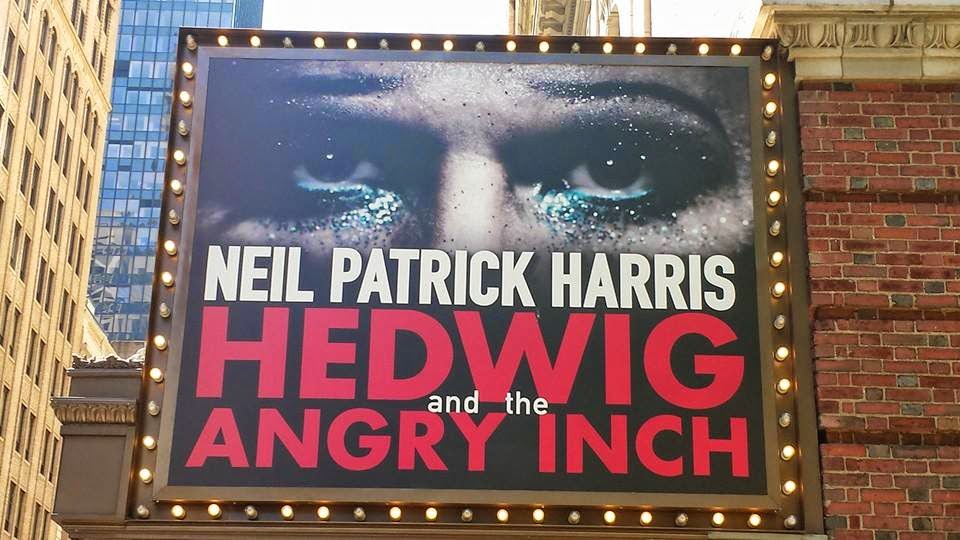 At eleven I met a former classmate from grad school at a local Park & Ride and we drove down to Stamford to get the train to Grand Center Station. Because of the trouble they are having with a bridge in South Norwalk and my last experience on a train, I want to bypass the bridge and take the train from Stamford.

We lucked out, just as we arrived on the station platform there was an express train arriving so we bought our tickets and got aboard. We arrived at Grand Central an hour and a half before the start of the play so we had lunch at Grand Central Station. I never knew that there was a restaurant concourse on the lower level, it seems like every time I went there we were rushing through the station. After lunch we started walking to the theater, we walked a little ways and realized that we were going the wrong direction and backtracked.

When we got to the theater there was a long line standing on the corner and I thought that the hot dog cart sure was doing a good business. We then realized that the line was actually for the theater! However, the line was moving quickly and we got in and found out seats without a long wait.

The opening of the musical of the musical was amazing and it set the tempo for the entire musical. This is the second time that I saw Hedwig and the Angry Inch and it was entirely different from the Hartford Stage production with Anthony Rapp. Neil Patrick Harris added a whole new dimension to the play; there more energy than the original play but it also went in an entirely different direction. From what I remember of the Hartford show it was more of a musical and the Broadway show was more a narrative rock opera.

After the play ended we walked back to Grand Central Station and our timing was again excellent, the 5:07 train back to Stamford was just boarding. There was a little drama on the trip back, at one of the stops a mother and child boarded and started arguing over a seat with another passenger, she was saying to the other passenger stuff like, “move your f**king a** over…”, “come on you want to fight…”, and  “I’ll fight you come on…” I thought she was taking the fact the person wouldn’t move over way too personal and emotional, and as my friend said she sure wasn’t teaching her child good conflict resolution skills.

When I got home a little after 8, I turned on the TV while I was making supper and the Tony Awards were on and just then they awarded the “Best Performance by an Actress in a Featured Role in a Musical” and it was Lena Hall who played Yitzhak! Later they had a scene from the play, “Sugar Daddy” with Neil Patrick Harris who later won Tony Award for “Best Performance by an Actor in a Leading Role in a Musical.” Kevin Adams won “Best lighting design of a musical," and the play won "Best Musical Revival” It was kind of neat that the play won three Tony’s the day we saw it.

My friend Sarah took the picture of the marquee. Here is a video from Good Morning America show interviewing the cast of Hedwig.

Oh, one other thing, the play is not for kids, I would guess it would be rated a "M" and I was a little surprised that they showed "Sugar Daddy" uncensored in TV last night. I can wait to hear the conservatives commenting on it today, that a play on transgenderism won Tonys last night.