They Are Grooming Us

The conservatives are always saying that we are “grooming” their children but in reality they are grooming children to be straight by denying students from talking about being LGBTQ+.

Homework assignment requires kids to explain how they would de-gay their friends
The assignment said to write a letter to "a friend of your same gender who is struggling with homosexuality" and use "the Bible, reason, and your personal friendship" to talk them out of being gay.
LGBTQ Nation
By Alex Bollinger
May 16, 2022


A Christian school in Kentucky told students to explain how they would take a friend out of being gay in a homework assignment entitled “Letter to a Homosexual Friend.”

“Essay: Write a letter to a friend of your same gender who is struggling with homosexuality,” a screenshot of the middle school homework assignment from the Christian Academy of Louisville (CAL).

Assume that you have known this friend since Kindergarten, that you go to the same church, and that you have been pretty good friends over the years until now. This friend is your same age.”

“The aim of the letter should be to lovingly and compassionately speak truth to the person you’re talking to in a way that does not approve of any sin. Instead, TRY TO PERSUADE THEM OF THE GOODNESS OF GOD’S DESIGN for them.”

What would you write? Would you say that you would encourage them to follow their heart?

One person responded to Davis with a letter that probably wouldn’t have gotten a good grade but that the friend may have actually appreciated.

Here is his letter. 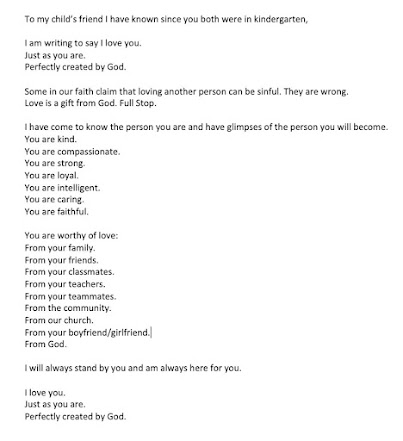 In another article about this…

Kentucky middle school students asked to write letters to imaginary friend ‘struggling with homosexuality’
Students were asked to convince their friend that they are not gay using lessons from the Bible.
The Hill
By Brooke Migdon
May 16, 2022


Middle school students at a private Christian school in Kentucky last week were sent home with an assignment to write a letter to an imaginary friend “struggling with homosexuality.” Using teachings from the Bible, students were asked to “persuade” their friend in no less than eight sentences that they are not gay.

Davis told the Louisville Courier Journal that a close friend whose child attends CAL had shown him the homework and was “visibly and understandably upset about the assignment.”

“She doesn’t know how to handle it. … And her kid’s upset,” Davis said. In a series of follow-up tweets, Davis “completed” the homework assignment himself, writing a letter addressed to his seventh-grade self, who had been afraid to come out as gay.

“I’m sorry you can’t be yourself,” Davis wrote to his younger self. “I’m sorry adults teach something is wrong with you. Stay strong. You’ll find out by being yourself and staying strong…things really work out for you.”

They are the ones who are grooming targeting us with their hate and it is taking a toll on children who are afraid to come out, who do self-harm, but that is what the conservatives want… they want us back in the closet.