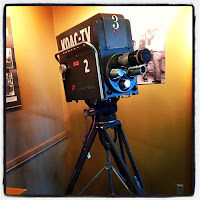 [Reprint from November 24, 2021]
Those that know me know that I very rarely wear any makeup, well there was an exception to that.

I get requests for interviews all the time and in 2018 I got one from Comcast… Hun?

Well they have a program that they call “Newsmakers” and they invited me on their program and they were taping it at the Infinity Music Hall in Hartford, that peaked my interest in doing the interview.

So I am wandering around the deserted lobby of the music hall wondering if this was the right place. The place is deserted. So I go into the music hall and there are people up on the stage just milling about and I walk down there, and say “Hi I here for an interview for ‘Newsmakers.’”

This woman walks over to me and says she’s someone with the show and puts her arm around my shoulders and steers me backstage. Whoa how neat is that wandering around backstage of Connecticut premier music venues! She then introduces me to the person who will be doing the interview and then she asks me the question… do I want any makeup for the show?

My first inclination was to say no. But then I remembered the Nixon Kennedy debates how Nixon refused makeup and lost the election to Kennedy. So I said yes.

The woman leads me over to another woman next to a tall director’s chairs and seats me in it, puts a towel over my dress… yes you read right I was wearing a dress and not my usual Tee shirt and jeans. I was then lead out on to the stage and seated at a desk with the interviewer.

When it was over we shook hands, they said that they would email me with the link when the show came out.

I emailed the link to my brother’s family, I thought that it was neat that I was on a cable show that is on the New England News Network, the response I got blew me away!

Instead of hearing back “That’s cool!” I go emails back from them “You got to meet Eric Clemons!!!!”

You don’t know who Eric Clemons is?

He’s been a sportscaster for ESPN, FOX NFL Sunday, and FOX Sports Net!

Okay if you say so.

Oh... getting the makeup done was really neat. Sitting up on stage with the lights, mic booms, and the bustle of the stage crew made it feel like I was in a Hollywood movie. I have been on the local Sunday talk shows on the local network affiliates for Fox, NBC, and CBS and they don’t do any makeup so this made me feel kind of neat, like it was a big production and it made the interview special.

Email ThisBlogThis!Share to TwitterShare to FacebookShare to Pinterest
Labels: my story, vacation