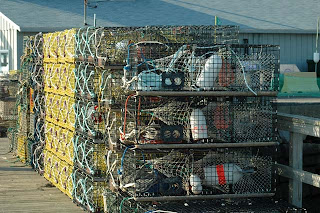 Back maybe 15 years ago I used to go up and dog sit my brother’s dog when they went on vacation, I enjoyed doing it for three reasons, first there are some great beaches to go to, second they are near one of the top LGBTQ+ town on the east coast, and lastly but for me very high up on the list… LOBSTERS!

As anyone who follows my blog knows that I love the Homaridae know as the Maine Lobster.

Well this tale begins at my brother’s and sister-in-law’s condo in Maine and only a few miles away of the harbor town of Kennebunkport (That the Bush family put on the map) and the village of Cape Porpoise and a little clam shack at the very end of the peninsula right next to the dock where they unload the lobster boats… you can’t get any fresher lobsters than that!

So at the shack I went in and picked out my crustacean that would be my dinner along steamers and corn-on-the- cob, plus a bowl of their clam chowder. You can’t get any more New England than that!

I found an empty picnic table out on the deck overlooking the harbor, while I was sitting there the place filled up with families so my table was the only one left with open seats. I was watching the cars pull in and out of the parking lot and I saw a North Carolina car pull in and a family of four get out and head in to place their order. As they came out they looked around for an open table and the father came up to me and asked if they could join me at the table and of course I said yes.

I had already had my clam chowder and was working my way through the steamers when they sat down, they pretty much kept to themselves. Then the lobsters were served.

Right away I recognized Novices! They just stared at the lobsters not knowing where to start.

I felt as a true connoisseur of lobster that I had to help them.

BINGO they just read me a trans!

But they still were listening to me on how to eat a lobster.

A few minutes later the husband’s widened… Ah he had just read me. Then he whispered to his wife who looked at me. She then made some small talk to me about how delicious the lobster meat is and how picturesque the harbor and town is, it is so Maine. 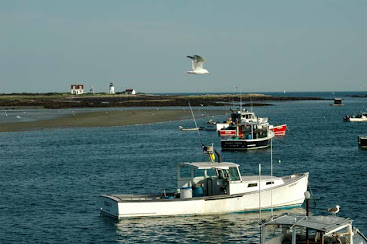 I pointed out the Goat Island lighthouse and how it is the headquarters for the Secret Service protection detail for President Bush and that they and the Clintons like to eat at the attached restaurant.

I had finished my lobster and stood to get up to leave and I mentioned a good ice place in Kennebunkport for dessert.

Moral to the story: Good food breaks down barriers.

I doubt that they would have overcome any hesitation of talking to trans woman if it wasn’t for the lobsters and second there is now a whole new family of lobster aficionados.

Email ThisBlogThis!Share to TwitterShare to FacebookShare to Pinterest
Labels: about me, lobster, my story