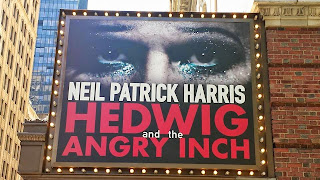 I have seen the musical twice the first time was at the Hartford Stage Company and the second time on Broadway with Neil Patrick Harris and the first time the lead was played by Anthony Rapp.

Down under there is a protest over the lead role in the musical.

'It's not about cancel culture': Hedwig and the Angry Inch postponed after trans-led petition
One of Sydney festival’s flagship shows will no longer go ahead, after the casting of Hugh Sheridan drew ire from sectors of the queer community
The Guardian
By Kelly Burke
18 November 2020


The actor who launched a petition that led to Sydney festival’s cancellation of Hedwig and the Angry Inch has spoken out about why they believe “it’s time to make change happen” when it comes to casting transgender roles.

The January festival announced the postponement of rock musical and seminal queer show Hedwig and the Angry Inch on Tuesday, following a flood of complaints over the casting of a cis male in the title role.

The Packed to the Rafters actor Hugh Sheridan was announced to be playing the role of Hedwig, a complex genderqueer character, in early November.

Okay so what are they protesting? They want a trans actor to play the part of Hedwig.

Since launching a social media campaign on Monday, Daya Czepanski has collected more than 1,700 signatories expressing the transgender community’s “profound sadness and disappointment” over the casting of “a cisgender male as a transgender character”.

“[This] is offensive and damaging to the trans community, and continues to cause genuine distress and frustration amongst trans and gender non conforming performers all across Australia,” the open letter posted on Instagram said. It called on the show’s producer and the Sydney festival to “rectify this casting choice” by casting a transgender actor in the title role, employing “trans advocates on the [Sydney festival] creative team”, and including “trans advisors and talent” in the Hedwig production.

Who knows the story of Hedwig, raise your hand.

Well the story is about a teenager in East Germany in the 1970s, an American soldier is smitten with Hansel Schmidt (Hedwig) and the soldier concocts a plan to get Hansel out of East Germany by having a “sex change operation” (I didn’t use “Gender Confirming Surgery” because he was never diagnosed with gender dysphoria) then they can marry.

“It’s not about cancel culture,” Czepanski said, from their Covid-19 quarantine hotel in Christchurch, New Zealand. “It’s just about bringing an awareness that systemic change needs to happen from the ground up, and if we can fix the root cause of the problem we can work towards a healthy environment for non-cis trans artists.
[…]
“I don’t have all the clear answers; it’s a developing conversation, but it’s a conversation that needs to happen,” they continued. “It’s time to make change happen, and we can’t use the past as an excuse to not make that change.”

Those who follow my blog know that I am a support of trans characters play by trans actresses/actors so the conversation boils down to is Hedwig trans?

John Cameron Mitchell, an American actor, playwright, screenwriter and director who created Hedwig and originated the role, has previously said that he does not see Hedwig as a trans character, and that it was a role that could be played by anyone.
[…]
“Hedwig was forced into kind of an accidental trans state by political and by patriarchal pressures,” Mitchell told Buzzfeed. “I’ve seen trans people [play] it, I’ve seen female people do it … the feelings and the ideas are more important than the attributes of the person playing it physically or age-wise.”

The counter argument is...

“We are in a different time now, and we are trying to find a way to have these discussions,” she said.

So what do you think? Is Hedwig trans?