The TDoV was last week and as you might have guessed I had some thoughts on the matter. 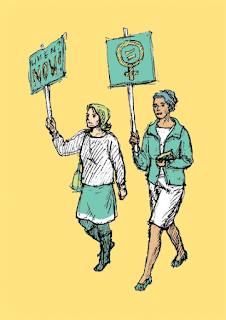 For those of us who have transitioned it really doesn’t make too much sense, for us everyday is a TDoV. For those who crossdress what are they supposed to do, get dressed up and walk up and down the a street?

A lesbian that I know says on National Coming Out Day she is going to call random people and say, “Hi, I’m a lesbian” and hangs up. are we supposed to do the same thing?

I can see the TDoR where we remember those who were killed this year, but a TDoV?

I know that many trans people only dress in the safety of their own home or at a support group and for the rest of us we go out throughout the year. For the rest if us we are visible all year, we go to plays, movies, restaurants, and shopping. Or are we supposed to do something special? Something like my lesbian friend jokes about calling random people and say “Hi I a trans woman.” or wear a sign around our neck saying that?

The famous quote from Harvey Milk,

I have always added, only if it is safe.

And that’s the thing… safety, Harvey Milk was right about visibility it does change minds but it can also create violence against us, if you live in a red state or if some bigot sees you it could be dangerous and that is why I don’t post anything about the TDoV because it might not b safe.

Sometimes I wish that I wasn’t so visible.

At the deli counter the clerk said that she saw me on the news last night! Ugh. I just wanted to buy so cold cuts or the time at a department store someone came up to me while I was looking at blouses and said that they were at one of the places where I was a guest speaker.

But in the back of my head little warning bells go off… it could have been someone who hated trans people just as easily.

But then there is this.

Standing in line waiting for our reservations to be called a woman came up to me and said that she’s a social worker and attended my workshop at the NASW conference and because of what she learned that day when a client came out to her she knew what to say and do for her client.


Guess what I forgot yesterday?

I spaced out and I thought that I had pre-written the blog for yesterday but I didn’t. Ops...

Nothing happened to me yesterday, I'm okay and thank you for those who asked if I was all right.

Email ThisBlogThis!Share to TwitterShare to FacebookShare to Pinterest
Labels: about me, trans stuff