Diana’s Not So Excellent Adventure 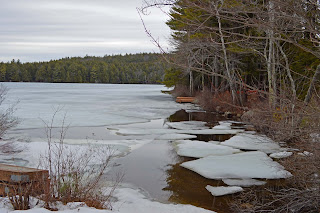 Whew! I made it home in one piece!

I was up at our cottage in New Hampshire opening it up for the season. When I got up there around 5:30 on Wednesday, my brother found a leak in the cold water pipe when he turned on the water. So Thursday morning I got the propane torch out and fixed the leak and when we turned on the water back on we discovered a couple of more leaks around water pipe the drain caps. We couldn’t stop the leak so we decided to replace the drain caps with ball valves. 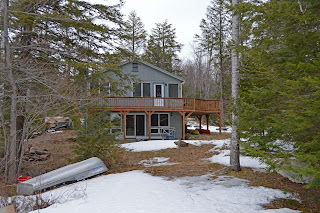 While I was taking a break, I was sitting in the rocking chair in the basement rec room when a movement in the corner of my eye caught my attention. I looked and there was a big ugly moose just outside of the sliding glass door looking in! It scared the daylights out of me. You can see the glass sliders in the photo. The moose was no more than 3 or 4 feet for the door in the basement.

Today, we unsoldered the elbows with the drains and soldered the ball valves with a “Tee” connector but we couldn’t get good solder joints and now they were leaking!

Meanwhile, the little snowstorm was becoming a major snow event. It was snowing so hard we couldn’t see across the lake and it was started to accumulate. We started getting frustrated between the leaking solder joints and worrying about being stuck in the cottage. So around three we decided to pack up and head home. We barely made up out of the driveway on to the road. We then couldn’t make it up the hill at the end of the street which is to the only way out.

My brother called the highway department asking them to plow the street, about 20 minutes later the town truck came down the road and we followed it out. We slowly made our way to Hillsboro and Rt. 9, I decided instead of going over the mountains in the snow to Keene and Brattleboro VT, to instead got to Manchester where it was only raining to I-93 and then take I-495.  As soon as I turned on to I-495 I was in a traffic jam from I-93 exit to Rt. 4 in Chelmsford, ten miles crawling at 4 to 5 miles an hour. It normally takes me a little less than 3 hours to get to home from the cottage and going down I-93 and I-495 it should have taken 4 hours, but it took 6 hours to get home! AGH! Today was not a fun day.