It Is Time For Them To Act

The NCAA must come out and support their polices and us.

NCAA Reaches a Key Moment as Transgender Laws Multiply
The NCAA has had policies in place since 2011 that allow for transgender participation in sports
NBC 10 Philadelphia
By Eric Olson
May 6, 2021


The NCAA has reached a delicate moment: It must decide whether to punish states that have passed laws limiting the participation of transgender athletes by barring them from hosting its softball and baseball tournaments.

The NCAA Board of Governors issued a statement April 12 saying it “firmly and unequivocally supports the opportunity for transgender student-athletes to compete in college sports."

“When determining where championships are held, NCAA policy directs that only locations where hosts can commit to providing an environment that is safe, healthy and free of discrimination should be selected," the board added. "We will continue to closely monitor these situations to determine whether NCAA championships can be conducted in ways that are welcoming and respectful of all participants.”

Not only should the NCAA not hold tournaments in those states but they should be kicked out of the NCAA system and not eligible to play in NCAA sports.

But that will never happen, the NCAA will only give them lip service. Why? Because those teams bring in $$$$$ “Big Money” $$$$$ and money talks and nobody walks. 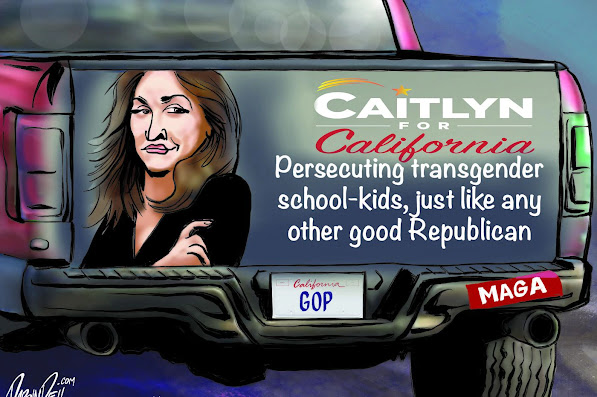 From the Philadelphia Inquirer,

Caitlyn Jenner, who is running for governor of California as a Republican, told TMZ that she supports the recent push to ban transgender girls and women from competing on all-female school sports teams. Jenner publicly came out as a trans woman in 2015, after a long career in the public eye including as an Olympic gold medal-winning decathlete. GOP legislators in Pennsylvania have proposed such a ban, the likes of which Jenner endorsed as a “question of fairness.” But to cartoonist Darrin Bell, her position comes down to a Republican following the party line.