A Shot In The Arm.

When I got my vaccination it was a unique experience, when I walked in I had to show my ID and then they directed me to a room on another floor. As I got off the elevator I heard my name called in a friendly way. I masked woman laughed and said that the masked makes a good disguise… she was a former classmate from UConn School of Social Work and the other women helping out were interns from the school. It was like “old home week” as she introduced me to the interns.

So this article raised my eyebrows.


Ivan Staklo was eager to get vaccinated, but after getting his first dose, he doesn’t even want to look at his vaccination card. It’s a reminder of the “odd” experience he had, rather than the exciting moment he was fervidly looking forward to.

Staklo, a transgender man from New Haven, said his first dose experience was one of “humiliation and disrespect.” His gender and name were manually changed in the system by an individual working at a Waterbury clinic because the ones he reported didn’t match his official I.D. In multiple ways, Staklo said his identity was erased that day.

This is all confusing to me… when I got my shots there was nothing to checkoff about gender on the forms, the only thing that I remember filling out was on VAMS and it said “Male’ and “Female” there wasn’t anything about sexual orientation or gender identity. The article states that...

The Vaccine Administration Management System (VAMS) only has options to select “Male, Female, Decline to specify, or Other.”

The VAMS form was created under the Trump administration.

As for his name, I do not know his legal name and it is his legal name that they have to use. Here in Connecticut it is very easy to legally change your name and if you cannot afford the fees you can ask for a waver for the fee,

State data suggests that out of the more than two million COVID-19 vaccinations in Connecticut, just five of those doses have been given to transgender people as of May 6, with only four fully vaccinated. Roughly 3,000 additional individuals who have initiated their vaccinations are marked as “unknown,” with around 2,000 fully vaccinated.

Um… since that data is not collected how do they know how many trans people got “the shot?” I know of well over a dozen trans people who got vaccinated.

“I think the data is, frankly, wrong,” said Katy Tierney, an endocrinology specialist and medical director of the Middlesex Health Transgender Program. “We just don’t know how many trans people have been vaccinated.”

Experts say the need for a proper count is important. From cataloguing medical side effects to crafting outreach and funding, accurate data tells a story about vaccines in the transgender community that can shape policy, medical response, and health outcomes— and many think that story is being lost.
State forms are different, according to the article “...found that the MyChart programs from organizations such as the University of Connecticut, Middlesex Health and Hartford Healthcare were more nuanced than others, but still had “problematic” language.”

The “problematic” language was that they only had…

“Transgender Female MtF, Transgender Male FtM, Queer, Gender fluid, and Other.” Although more options were available, the chance of having a checkbox for those who are nonbinary is rare, with the exception of Middlesex Health.

The is a bill before the state legislature to add nonbinary as an option to state forms, it is already an option on our birth certificates.

It is hard during transition; when some forms have been changed while other are in the process of changing and it creates a limbo for us. For one thing some of the forms are state forms like driver licensees while other are federal forms like Social Security, Medicare, and passports.

I know that IDs at vaccination was discussed at state agencies that showing ID is being discussed it is not an easy problem to solve because of the need to interface with the federal Health and Human Services reporting requirements.

And if you think that we are being under counted…

There is a needs assessment survey for the LGBTQ+ community here in Connecticut, take the survey if you are a Connecticut resident over 18!

The survey is being run by the Connecticut Department of Public Health for just this purpose. 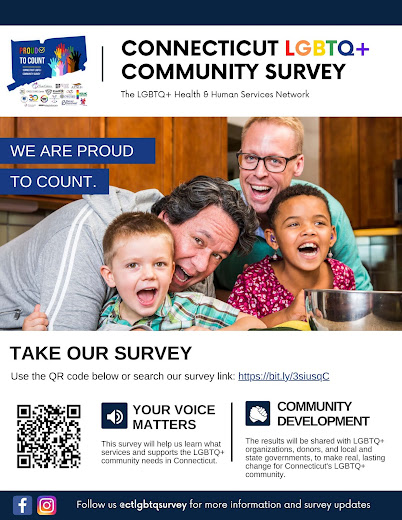