1. While going through old boxes, you find an old library book of which you are very fond, but you realize that it was a library book. You assume that the library has long-since written the book off as a loss because it has been boxes away for 20 years or more, and the book carries a great deal of sentimental value for you. Would you return the book or keep it?
I would return it. If I liked it so much, I would have bought a copy of it.

2. You visit one of your closest friends who is battling a terminal illness. It’s clear he or she will not survive, but is in a lot of pain. Your friend begs you to briefly disconnect life support long enough for death to come. If there is no way your intervention could be discovered and no way you could face any kind of prosecution, would you grant your friend’s request?
No comment. It brings back too many sad memories. 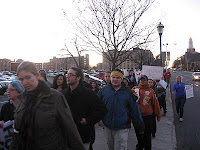 3. You have the chance to be in a parade and ride on a float supporting a cause you believe in, but you can’t appear in any kind of disguise or costume: which cause’s float would you most likely be comfortable selecting?
Been there, done that.
The photo is of a rally and march through Hartford CT for transgender rights

4. Your company’s top executive team arrives for a surprise visit, and selects you and a handful of other employees to meet with one-on-one in an attempt to get the pulse of their employees and to uncover any problems within the organization. How honest are you likely to be about your answers when they ask about specific problems you know exist, even if it means that friends you work with could lose their jobs over what you say?
Been there done that. I talked about the problems not the people. It has great impact if you don’t make it personal, “The problem with the purchasing department is the orders are not being processed”… Rather than, “Bill in purchasing is sitting on all the orders”

5. You find yourself slated to be a guest on a talk show: which host, living or dead, would you most like to be interviewed by, and why would you choose that host?
Walter Cronkite, he was the greatest!

6. Your church decides to take part in a political protest, and it seems that nearly everyone feels the same way about the issue. You, however, do not share their view. At the risk of being ostracized, would you deny to participate, or would you search for a way to quietly assist, without being out in front?
Been there done that. Not with a church, but with an organization. I said that I did not belief in the action that they wanted to do. In my community organizing classes they taught that if you were going to have an action, you needed a defined target and strategy (such as target=Bank of America strategy=sit-in) and they didn’t have a target or strategy.
Posted by Diana_CT at 4:21 PM