Politics As Usual In Texas

Last night there was a heroic effort to block the passage of an anti-abortion bill in the Texas Senate. Senator Wendy Davis filibuster for over 10 hours before she was declared “out of order” and the senate started voting. When the Senate finally finished the vote on the bill the clock said 12:02 after the deadline for the senate to adjourn.

On the Texas Tribune live blog followed the action on the Senate floor,

Texas senators are trying to get to the bottom of whether Republicans successfully pushed through a vote on Senate Bill 5, the omnibus abortion restriction bill, ahead of their midnight deadline.

Sen. John Whitmire, D-Houston, says the bill passed at 12:02 a.m.; if that's true, the vote may not withstand legal scrutiny.

"It's pretty conclusive that it didn't pass," said Whitmire.

But the Senate still has not officially adjourned sine die. When Senators resume floor proceedings, Whitmire said Democrats will call a point of order on the motion to vote on a bill after the midnight deadline.
[…]
12:27 a.m. by Becca Aaronson

When the clock struck midnight, Republican senators were gathered around the dais attempting to vote on Senate Bill 5. It's still unclear whether they were successful.

The protesters seated in the gallery erupted roughly 10 minutes before midnight, and screamed so loudly that the floor proceedings couldn't be heard.

State Sen. Dan Patrick, R-Houston, told the press, "we started voting before midnight," and therefore, it counted. But state Sen. Royce West, D-Dallas, said, "the session is over with...it's over with at midnight," and so, the vote didn't count.
[…]
1:08 a.m. by Becca Aaronson

The state legislative website currently shows a record vote on Senate Bill 5 on June 25 — Tuesday, before midnight. The page has been edited, as it originally showed a record vote on June 26, 2011.
[…]
1:43 a.m. by Ross Ramsey

A different look at the changing vote records. We took these screenshots from the Legislature's own website. The first one shows the last actions on SB 5 taking place after midnight:

And the second, taken 9 minutes later, shows the dates changed to 6/25: 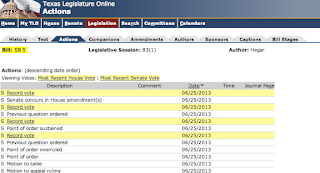 Hmm…. I seem to remember something about changing official government records as being a crime.

Later, the Lt. Governor declared the vote invalid, I wonder what would have been the outcome if these photos were not all over the web?