The World Health Organization that’s who.

Well they just came out with a report on gender and they are on side of the equation.


The Gender mainstreaming for health managers: a practical approach manual addresses how gender norms, roles and relations affect health-related behaviours and outcomes as well as health sector responses. At the same time, it recognizes that gender inequality is a cross-cutting determinant of health that operates in conjunction with other forms of discrimination based on factors such as age, socioeconomic status, ethnicity or place of origin and sexual orientation. The manual provides a basis for addressing other forms of health-related discrimination.

The first edition of the manual dates from 2011, and WHO is now updating it in light of new scientific evidence and conceptual progress on gender, health and development

3. Going beyond binary [The bold text is from the WHO report] approaches to gender and health to recognize gender and sexual diversity, or the concepts that gender identity exists on a continuum and that sex is not limited to male or female.

4. Introducing new gender, equity and human rights frameworks and tools to further support capacity building around these concepts and the integration of their approaches in the work of WHO.

Boy are the conservatives hopping mad!

Just those words got the conservatives in a tizzy, “gender identity exists on a continuum and that sex is not limited to male or female” for them those are fighting words…

The WHO has an existing "gender mainstreaming manual" which argues that there are many genders existing on a spectrum from male to female. The organization now says that does not go far enough, however.

The updated guidance will focus on "highlighting and expanding on the concept of intersectionality, which looks at how gender power dynamics interact with other hierarchies of privilege or disadvantage, resulting in inequality and differential health outcomes for different people," the WHO website reads at the time of reporting.

The update will also emphasize "going beyond non-binary approaches to gender and health to recognize gender and sexual diversity, or the concepts that gender identity exists on a continuum and that sex is not limited to male or female."

So Fox News turned their attention not at new policy but the integrity of the WHO,

The U.S. withdrew its membership from the WHO under former President Donald Trump, but President Joe Biden rejoined soon after gaining office.

Republicans in Congress have sought to curtail any authority the WHO has. Rep. Mike Rogers, R-Ala., also introduced legislation calling for the U.S. to leave both the WHO and United Nations permanently in June.

Rogers argued the U.N. has "repeatedly proven itself to be an utterly useless organization."

The New York Post (Which is part of Rupert Murdoch's News Corp) reported that,

“It is a dismissal of basic biology – and [a] mistake,” Jenny Gamble, a professor in the School of Nursing, Midwifery and Health at Coventry University, told the Daily Mail. “Biology is a key determinant of health and illness.”

The new guidance could lead to unforeseen issues, Gamble insisted.

“Not being clear about basic biology opens the door to a range of problems, including very poor health communication but also distorted data,” Gamble said.

“The wording regarding there being more than male and female sexes is concerning,” Dr. Karleen Gribble told the outlet. “The website says that the handbook is being updated in light of new scientific evidence and conceptual progress on gender, health and development.”

“Rather, the idea that there are more than two sexes, is a postmodern, unscientific understanding that should not be supported by the WHO,” she said.

Of course they quote the Daily Mail which Wikipedia says…

As a right-wing tabloid, the Mail is traditionally a supporter of the Conservative Party.

The conservative pundits are all cranking up their machines to discredit the WHO. They take a very narrow view the gender is based upon only chromosomes and physical characteristics which is a 1950 view of sex.

The Science of Biological Sex
What does the science actually say about biological sex?
Science-Based Medicin
By Steven Novella
July 13, 2022


The debate over how best to approach people who identify as transgender or non-binary is many-layered and can be complex. Medical questions about the evidence for the safety and efficacy of specific interventions, and the ethics of treating minors, deserve thoughtful and open discussion. The optimal way to incorporate transgender athletes into competition also could benefit from a good faith debate.

Unfortunately, discussion around transgender issues suffers from at least two sources. First, it has been coopted as part of a politically-motivated culture war. This reality is exactly the opposite of thoughtful good-faith discussion. Second, for most people wrapping their head around a reality that may not conform to traditional notions of strictly binary sex and gender takes a lot or processing. Misconceptions about the basic science are rampant, and are, in fact, encouraged by the culture warriors.

The notion that sex is not strictly binary is not even scientifically controversial. Among experts it is a given, an unavoidable conclusion derived from actually understanding the biology of sex. It is more accurate to describe biological sex in humans as bimodal, but not strictly binary. Bimodal means that there are essentially two dimensions to the continuum of biological sex. In order for sex to be binary there would need to be two non-overlapping and unambiguous ends to that continuum, but there clearly isn’t. There is every conceivable type of overlap in the middle – hence bimodal, but not binary.

For the conservatives anything that requires thinking gives them a headache, I like what a couple of commenters said,

One wrote: Biology is inherently messy and that seems to be problematic for a lot of folks, for any number of reasons. For me that is what makes it fascinating, but it sure seems to upset a lot of folks that seem to want or need everything to be neat and tidy.

And a person replied with: People don't do well with uncertainty. Which I think is the fun part. 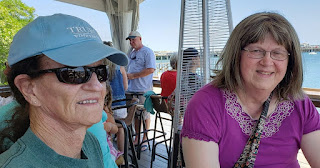 I am at a funeral for a close friend today, she passed away after a short illness.