Some gays and lesbians stab us in the back. They have our back but it is to stab us in it and it is happening right here in Connecticut!


June 2022 brought one of the most consequential and worrisome Gay Pride Months of my long life.

June has traditionally been a month of celebration for the LGBTQ community, marking so much progress, at what often seemed like a dizzying pace, as the country, over a relatively short span of years, widely embraced what once seemed unthinkable: gay marriage.

It still surprises me how normal my marriage to a man now seems to appear to so many we meet.

But this year, Pride celebrations were marred by terrible violence and hate crimes. Baptist ministers in Idaho and Texas called publicly for the execution of gay people. The threats went viral.

A wealthy Connecticut contributor to prominent national gay hate crusades has pledged to support the campaign of Connecticut GOP gubernatorial contender Bob Stefanowski, an unsavory pledge the Republican candidate has not disavowed in the many months since it was disclosed.

Here in southeastern Connecticut, the Groton GOP town chairman picked up the sword of the newest Republican culture wars campaign, to marginalize and scorn transgender people, suggesting in a comment posted recently on theday.com that he is "uncomfortable" about all the "woke" behavior regarding transgender people.

The comment, incredibly, was posted by Groton GOP town Chairman John Scott, a gay man, who said he thinks gays shouldn't be lumped together any longer with transgender people in the LGBTQ community.

"How convenient it has become for white gay men of means to look the other way as the transgender members of our community find themselves in the crosshairs of ambitious politicians willing to persecute them in order to climb the political ladder ... All people have the right to live their lives in equal dignity, free from government overreach," he wrote.

Differences Between LGB Democrats and Republicans in Identity and Community Connectedness
Using data from the Generations Study, this report examines the relationship between sexual minorities and political identities using five indicators that describe the relationship LGB people have with their identity and their connection with the LGBT community.
The Williams School of Law
By Llan H. Meyer and Soon Kyu Choi
October 2020


A 2020 Williams Institute report said that nearly 9 million LGBT adults are registered and eligible to vote in the 2020 general election and half of registered LGBT voters (50%) are Democrats, 15% are Republicans, 22% are Independents, and 13% identify with another party or did not know with which party they most identified.1 In this report we assess differences and similarities between sexual minority people who identified themselves as Republicans or Democrats. The U.S. Transgender Survey finds only 2% of transgender people, not included in this report, are Republicans.

Researchers and LGBT community members have seen an inherent incompatibility between LGBT identity and Republican affiliation. Nonetheless, LGBT people, like other minority groups, hold diverse beliefs and political affiliations. In order to better understand the relationship between sexual minority and political identities, we examined five indicators that describe the relationship people have with their lesbian, gay, and bisexual (LGB) identity and their connection with the LGBT community. 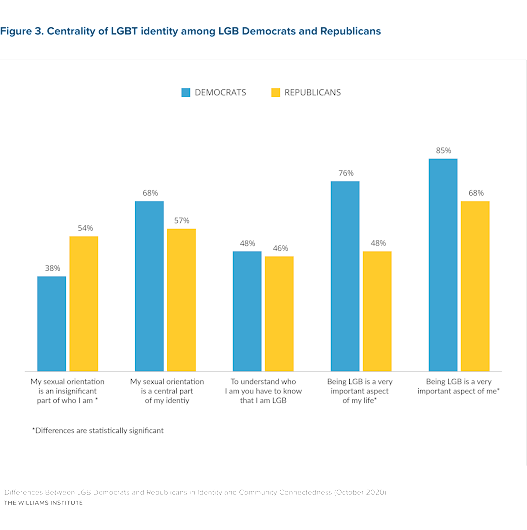 Compared with Democratic LGB people, more Republican LGB people said they would want to be completely heterosexual and that being LGB is a personal shortcoming. But similar proportions—more than a third—of LGB people of both party affiliations said they had tried to stop being attracted to same-sex partners at some point in their life (Figure 4). 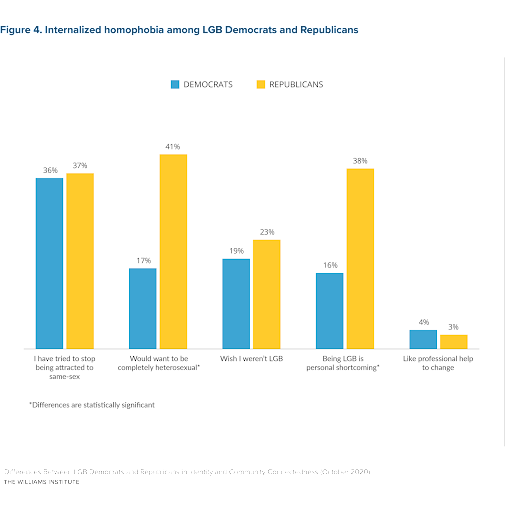 That is the biggie!

Internalized homophobia. To put it bluntly they hate being gay!

Lastly how much are they connected to the LGBTQ+ community…

In other words; me before us.