Mr. Romney — the Republican front-runner, whom White House officials view as their likely opponent — also faces the danger of looking oddly out of step if he presses ahead, as he did on Friday, with his accusation that Mr. Obama had made the recession worse.

“This recovery has been slower than it should have been. People have been suffering for longer than they should have had to suffer,” Mr. Romney said, at a supply company in Sparks, Nev., before Saturday’s caucus in that state. “Will it get better? I think it’ll get better,” he added. “But this president has not helped the process. He’s hurt it.”
New York Times

That was what Romney said after the January unemployment rates came out on Friday. The Republicans candidates are running on who can beat President Obama in November, if you look at the polling data you will see that the most important thing for the voters in the primaries is who can beat the President. Why? Because they know that they can’t run against him on the economy and jobs. The Democrats create jobs and stimulate the economy and the Republicans create unemployment and ruin the economy. Don’t believe me? Well take a look at the data… 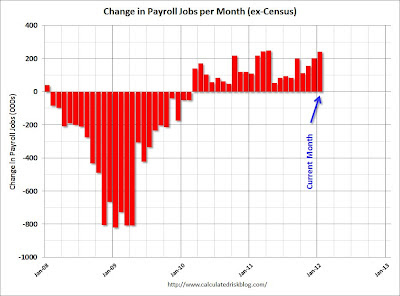 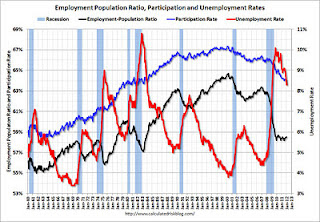 The economy is much better off since President George W. Bush’s administration, look at the GNP… 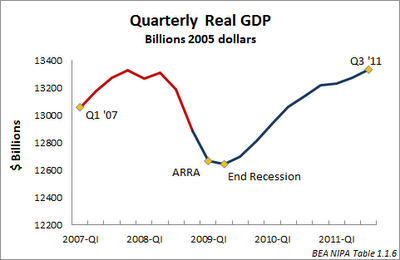 Notice how President Obama has turned the economy around.

This graph is the Dow Jones Industrial Average, notice how we are digging out from the crash at the end of President Bush’s administration. 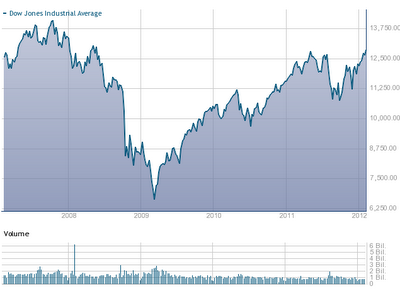 Let’s take a look at the national debit…

Notice how the debit increased under Presidents Regan, George M. Bush, and George W. Bush and it decreased President Clinton who actually had a budget surplus by the time he left office. Then it sky rocketed under President George W. Bush when he gave tax cuts to the mega rich. President Obama tried to repeal the tax cut for the millionaires and billionaires but was stymied by the Republican controlled House and as a result the deficit keeps climbing.

Romney said he can make it better by continuing the tax cuts for billionaires and millionaires like himself. Well we have seen where that will lead us. The Republicans have blocked President Obama job imitative bill and we are now seeing the results of them blocking the bill, cities and towns throughout Connecticut are laying teachers, police officers, fire personnel and closing schools. Cities and towns are over taxed and they are forced to cut essential services. Instead we need to put people to work fixing bridges, building infrastructure, hiring teachers, police officers and fire personnel. We need to rebuild America.

President Regan asked the famous question, “Are you better off now?” The answer for many people is still no. But the change is in the wind and for others there is light at the end of the tunnel.
Posted by Diana_CT at 10:50 AM