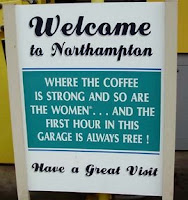 That was what I was at the first ever Northampton Trans Pride, the temperature was well into the 90’s and very humid and I baked sitting out on the asphalt parking lot. I had a big golf umbrella that I taped to the back of the chair that gave me some shade and a little relief.
The morning started out overcast when we were at the muster point for the march and the temperature wasn’t bad, but the sun came out and the temperature climbed fast into the 90’s.
When I got to where the march would begin, there were are ready hundreds of trans-people there and more were pouring in.We waited there for the march to being and from what I heard when talking to some friends who were organizing the march they said that there were over 800 people there.
During the march I was over come by emotions, hearing hundred of trans-people chanting – “What do we want? TRANS RIGHTS! When do we want it? WE WANT IT NOW! “What do we want? TRANSGENER FREEDOM! When do we want it? WE WANT IT NOW! With just ordinary people lining all the streets clapping as we went marched by. It was an empowering moment. I was near the end of the march with the Connecticut TransAdvocacy Coalition, as we went under the railroad bridge on Main St. as far as I could see it was just an endless line of trans-people going up the hill on Main St. over three blocks in length. 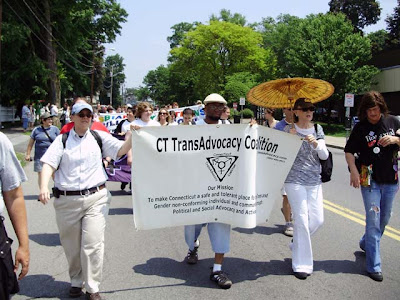 As we wound our way into the Armory St. parking lot the crowd thinned out into the parking lot. I was at the Connecticut Outreach Society’s table and sat in the shade of the golf umbrella, that I had taped to my chair to watch the speakers. The heat was unbearable at times and I went into a local department store to cool off.
The speakers were fantastic, Miss Majors was the Grand Marshal of Trans Pride, she was one of the rioters in the Stonewall Riots in 1969. Living proof that we were there at Stonewall even through some people want us to forget that we were.
After the rally, we went up to a reception given by GLAD.

For more photographs of the March and Rally see my blog entry here.

This was my first try at using a new camera; I bought a Olympus FE310 because I wanted a camera that I could carry in my pocketbook. At the time I didn’t know that it could also take movies, but with a 2Gig memory card it can record over 30 minutes of video.

Email ThisBlogThis!Share to TwitterShare to FacebookShare to Pinterest
Labels: about me, trans stuff, video